To better understand Bulldog hip dysplasia, you must understand the function of the hip joint first. The hip joint is just like a ball fixed into a socket. The femoral head is the ‘ball’ and the acetabulum or the ‘socket’ is where it is connected to the pelvis of a dog. In normal hip joints, the femoral head can rotate smoothly and freely within the socket. A strong ligament holds the joint together.

In most cases, Bulldogs who develop hip dysplasia are born with normal hips.  But because of genetic factors, the soft tissues around their hip joints do not develop normally and remains loose. 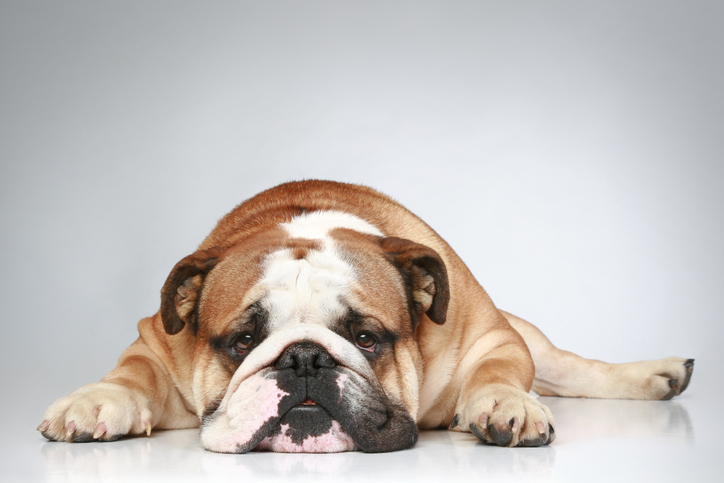 When the hip joints and the tissues surrounding are too loose, the femoral head can get displaced on the edge of the socket instead of moving smoothly inside. This results in changes in size and shape of the articular surfaces – causing pain and possible formation of calcium deposits in the hip joints. This can affect either the left or right hip, or both.

Bulldog hip dysplasia can be debilitating and painful. If you are able to detect the early signs of hip dysplasia in your Bulldog, appropriate measures can be taken before the disease progresses and results in partial or complete dislocation of the hip joint, arthritis, or bone degeneration.

Here are some early signs of Bulldog hip dysplasia.

Signs of Bulldog Hip Dysplasia #1: Reluctance to Get Up

Your Bulldog finds it hard to get up if he has hip dysplasia. You may notice your Bulldog taking longer to stand up from a laid-down position, especially if the surface he rests on is slippery. He may do this to avoid feeling too much pain in the hip joint area. This behavior is a very common sign of hip dysplasia in Bulldogs.

Signs of Bulldog Hip Dysplasia #2: Pain and Sensitivity in the Hip Area

Hip dysplasia often causes damage or the breakdown of the cartilage in the hip joint. When this happens, the contact between the pelvic bone and the femur causes friction, which later results in joint inflammation and pain.

Dogs who suffer from hip dysplasia may whine or bark when the hip area is touched. Some dogs may even show aggressive behaviors.

Signs of Bulldog Hip Dysplasia #3: Refusal To Play or Move

Pain and discomfort can make your Bulldog lose interest in playing, walking, or even moving. Hip dysplasia can make your pet refuse to move, jump, climb, or descend the stairs in an attempt to avoid feeling pain.

Affected dogs often lose enthusiasm in doing things they used to enjoy. They may also refuse to obey their owners’ commands.

Have you noticed any changes in your Bulldog’s manner of walking? Is your Bulldog hopping like a bunny when he walks?

Bunny-hopping is one of the early signs of Bulldog hip dysplasia. To avoid pain, your Bulldog may try to lift either of his hind legs when he has to walk or move to another location. Dogs with hip dysplasia do bunny-hop to avoid putting on weight on their painful limb.

Signs of Bulldog Hip Dysplasia #5: Loss of Muscle Mass in Hips and Thighs

Bulldogs with hip dysplasia lose muscle mass on their hips and thighs. Because your Bulldog will most likely avoid using his hips and thighs, as the muscles in these areas generally shrink (atrophy). As your Bulldog relies on his front body to move him from one place to another, the muscles on his shoulders and front limbs may grow large (hypertrophy).

Signs of Bulldog Hip Dysplasia #6: Difficulty When Pooping or Peeing

Bulldog hip dysplasia results in pain in the hind leg. If your Bulldog suffers from this problem, he may experience problems when he goes potty.

Squatting and even lifting legs can be difficult for dogs with hip dysplasia. If you see your Bulldog straining, whining, or having a hard time when he pees or poops, consider having him checked for hip dysplasia.

Sadly, many Bulldogs with hip dysplasia experience motor problems. Some of them can manage to move or walk despite the pain. But they often find themselves falling over because they try to balance their weight to prevent their hip area from getting hurt. Sometimes, they slip or fall on the floor due to weakness in the hip joint.

If your Bulldog has this problem, consider placing rugs or carpets on the floor. Toe grips may also help prevent him from slipping.

Bulldog hip dysplasia can make it hard for your pet to sit in a normal position. Dogs with hip dysplasia often slouch or sit like a frog when they rest. The position allows them to rest without straining or putting much weight on their hips.

Bulldog hot spots are painful and itchy areas caused by different factors. Also known as acute moist dermatitis, these hot spots suddenly show up on dog’s skin especially in areas that are prone to moisture, such as the neck, hips, and in between skin folds. Appearing as red and moist lesions, these patches often exude END_OF_DOCUMENT_TOKEN_TO_BE_REPLACED

This post is sponsored by Suchgood, however, all opinions are our own. One of the first times I took my bulldog out in public, a END_OF_DOCUMENT_TOKEN_TO_BE_REPLACED

I think we can all agree that bulldogs are some of the cutest dogs out there, and they’ve got hilarious personalities on top of that. END_OF_DOCUMENT_TOKEN_TO_BE_REPLACED