What would you do if you see your Bulldog chewing paws incessantly? Exhibiting such behavior looks odd and it can also make your pet’s paws raw, sore, and painful. To stop your Bulldog from chewing his paws, you must learn the different reasons why they do it. 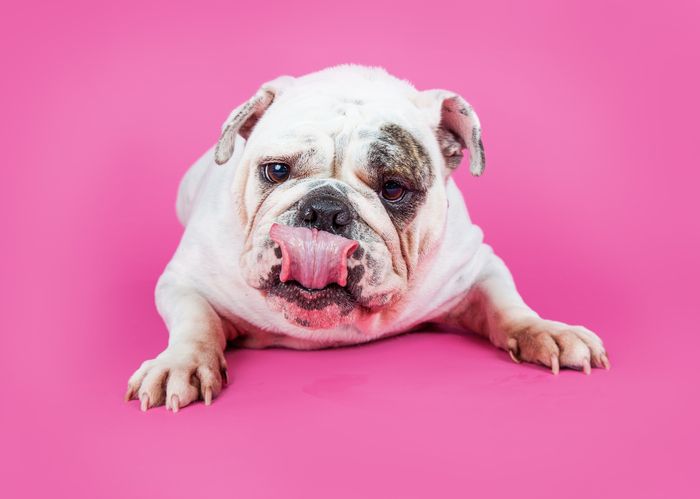 Anxiety May Be Behind Your Bulldog Chewing Paws

Anxious and depressed dogs have the tendency to display behavioral problems, such as chewing paws. They tend to over-groom themselves in an attempt to soothe their nervous system when their thoughts and feelings become too overwhelming.

Separation anxiety, lack of exercise, and stressful situations – having guests at home, fireworks – can cause your Bulldog to chew his paws.

These issues can be addressed by doing the following.

Yeast infection is a very common skin problem in Bulldogs. It can affect your dog’s body, ears, and paws. Trapped moisture is the most common cause of yeast infection in the paws. When this happens, your Bulldog’s paws become itchy, irritated, and smelly. Because the condition brings so much itchiness and discomfort on your pet’s paws, it can make him chew his own paws.

You can stop your Bulldog from yeast-related chewing with the following tips.

Bulldog Chewing Paws Because of Allergies

Unfortunately, Bulldogs seem to be very prone to allergies. Your Bulldog may be allergic to specific food/ingredients, dust, molds, pollens, and a lot of other things. And consumption or contact with any allergen can cause skin irritation in your pet. These irritations often occur in the ears and in between the paw pads. When this happens, these parts may become terribly itchy – leading to nonstop scratching, licking, and chewing.

Here are some tips to stop allergies that cause your Bulldog to chew his paws.

Parasites on Body Results in Your Bulldog Chewing Paws

Fleas, mites, and ticks can get stuck between your Bulldog’s paw pads. These parasites bite leading to itchy skin. As a result, your pet chews the area in an attempt to ease the itching.

To stop the parasite-related itching, you can do the following tips.

Why Your Bulldog Chews His Paws #5: Dry Skin

The air can be very dry during the winter and it can take moisture away from your Bulldog’s skin. In humans, lotions and skin oils work great in soothing the dryness. However, applying lotion or oils on your pet’s skin can be problematic. He may try to lick creams or any topical you apply on his paws.

Instead of putting lotion on his skin, it is better to mix fatty acids on your pet’s food a few times a week. Fish oil can help your dog’s skin and fur stay healthy and flexible.

Bulldog hot spots are painful and itchy areas caused by different factors. Also known as acute moist dermatitis, these hot spots suddenly show up on dog’s skin especially in areas that are prone to moisture, such as the neck, hips, and in between skin folds. Appearing as red and moist lesions, these patches often exude END_OF_DOCUMENT_TOKEN_TO_BE_REPLACED

This post is sponsored by Suchgood, however, all opinions are our own. One of the first times I took my bulldog out in public, a END_OF_DOCUMENT_TOKEN_TO_BE_REPLACED

I think we can all agree that bulldogs are some of the cutest dogs out there, and they’ve got hilarious personalities on top of that. END_OF_DOCUMENT_TOKEN_TO_BE_REPLACED