Have you brought home a cute Bulldog puppy? Be mindful of the importance of inoculation and stick to your Bulldog puppy vaccination schedule. It entails more significance when you are a new parent. Dog vaccinations are an essential part of a pet care regimen to ensure your puppy’s good health and prevent potentially deadly diseases. 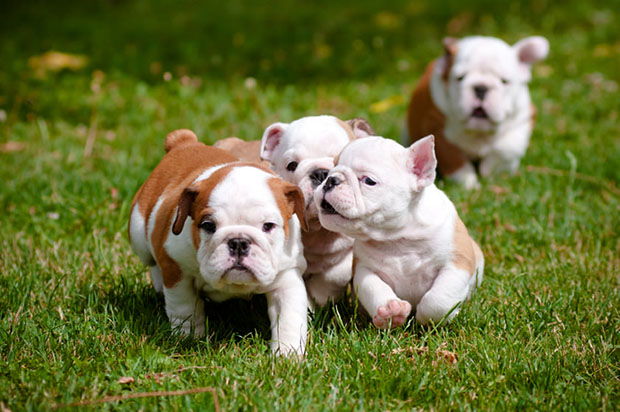 Injecting a virus or parts of the virus into an individual triggers an immune response. This immune response is found to be effective in protecting the individual against the virus that was injected or introduced into the body. Such research findings help make vaccines that boost an individual’s immunity without putting his health at risk.

Dog vaccinations involve the injection of antigens instead of the actual viruses. Antigens are large protein molecules that are found on a virus’ surface. They are the ones that trigger the dog’s immune response. Once the antigen enters the body, the immune system becomes mildly-stimulated and familiar of the virus. So when your Bulldog is exposed to the same virus, the immune system can easily recognize it and know how to fight it off – reducing the effects and severity of the disease the virus could have caused.

Parvo is a well-known puppy killer. It mostly affects puppies less than one year old. The disease is caused by the canine parvovirus that mainly targets the gastrointestinal tract. Signs of this disease include bloody diarrhea, loss of appetite, and vomiting. This disease is prevalent all over the world and can kill an infected puppy in just 72 hours.

Canine distemper is one of the most devastating diseases a dog can suffer from. The canine distemper virus targets and destroys a dog’s nerves, brain, and other organs. Respiratory infections, eye discharge, hardening of footpads, and seizures are important indications. This disease is very contagious and can easily kill unvaccinated puppies and adult dogs.

The canine adenovirus type-1 (CAV-1) causes canine hepatitis, which causes liver problems. Symptoms of the disease vary but may include fever, abdominal pain, lethargy, jaundice, and appetite loss. The disease has no direct cure and is only treated with supportive care. Canine hepatitis can kill the infected dog even before any symptoms are visible.

In most countries, owners are mandated by the law to have their dogs vaccinated against rabies. The rabies virus runs in the infected dog or animal’s saliva. The virus can be transmitted to other animals or humans through bites. In humans, the immediate administration of post-exposure prophylaxis (PEP) after a bite is necessary to prevent rabies from developing.  Rabies does not have a cure. The disease’s mortality rate in dogs is 100%. Infected humans who did not receive the PEP regimen often die.

There are other dog vaccinations that your puppy needs aside from the core vaccines mentioned above.  Non-core vaccinations are advisable for dogs, who live in or travel to areas where the diseases are prevalent.

Leptospirosis is a disease caused by the bacterial genus Leptospira. The disease triggers a wide array of symptoms and can result in liver or kidney failure, respiratory issues, meningitis, or even death. Also known as lepto, this disease is zoonotic, which means an infected dog can transmit the disease to humans.

Currently, there are more than 200 serovars (subtypes) of Leptospira and 20 of them are known to affect dogs. Leptospirosis can only protect your Bulldog against 4 serovars. For this reason, veterinarians only recommend leptospirosis vaccinations for dogs who live and travel to areas where the disease is prevalent. The vaccines are also effective for 4 to 6 months only so lepto vaccines must be given to dogs who live in endemic areas twice a year.

Deer ticks can carry Borrelia burgdorferi, the bacterial species that can cause the Lyme disease in dogs. Veterinarians only recommend this vaccine if your Bulldog lives in an area where the disease is endemic.

Other dog vaccinations, including the Canine coronavirus vaccine, the porphyromonas vaccine, and the giardia vaccine, are also available in many clinics. However, veterinarians do not recommend them for most dogs.

Combination vaccines that protect dogs from these diseases are often called “3-in1” or “DHP.”

Bulldog puppy vaccination: When is the best time?

Puppies inherit maternal antibodies when they drink their mother’s milk. This inherited immunity lasts until the puppies are 6 to 8 weeks old. Veterinarians recommend giving puppies their first shot of vaccinations at this age.

As the puppies grow older, the antibodies they inherited from their mother wear down. The decline of antibodies makes the puppies susceptible to many deadly diseases, especially canine distemper and canine parvovirus. For this reason, Bulldog puppy vaccination is a must when your pet is around 8 weeks old.

Bulldog puppy vaccination: How frequent are vaccines given?

Young puppies must be given combination vaccines at least three times. Each shot is spaced with 14 to 19 days intervals. Booster shots for core and noncore vaccines vary and depend on the veterinarian’s recommendations.

Bulldog hot spots are painful and itchy areas caused by different factors. Also known as acute moist dermatitis, these hot spots suddenly show up on dog’s skin especially in areas that are prone to moisture, such as the neck, hips, and in between skin folds. Appearing as red and moist lesions, these patches often exude END_OF_DOCUMENT_TOKEN_TO_BE_REPLACED

This post is sponsored by Suchgood, however, all opinions are our own. One of the first times I took my bulldog out in public, a END_OF_DOCUMENT_TOKEN_TO_BE_REPLACED

I think we can all agree that bulldogs are some of the cutest dogs out there, and they’ve got hilarious personalities on top of that. END_OF_DOCUMENT_TOKEN_TO_BE_REPLACED