In Brockton, Massachusetts, one lucky Bulldog has received a second leash in life thanks to the help of Shadow Fund.

Sometimes, hard times catch the best of us. During an interview with WBZ Cares, Beverly Dower said Pinky Pearl, her Bulldog, is alive today thanks to Shadow Fund.

The 2-year-old Bulldog got very sick when she was only a 9-month-old pup and needed a life-saving operation. That time, Dower had just lost her job and she couldn’t afford the expensive vet bills. 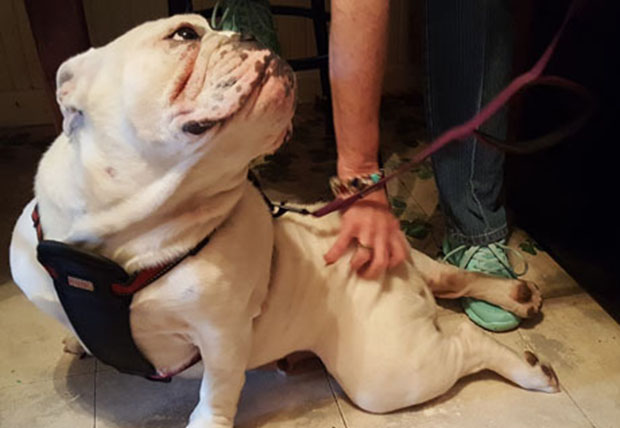 “I got laid off in January and I adopted Pinky Pearl in February. Then in April, she aspirated and ended up with pneumonia. I had to take her to the E-R and they wanted $1800.00 and they wanted it now,” told WBZ Newsradio 1030.

“It means everything to me. I didn’t want to lose her. She was only 9 months old. I just couldn’t afford to fix it. She would’ve died…she definitely would’ve died,” the grateful Bulldog owner shared.

Dower is only one among the hundreds of pets and pet owners the charity helped.

Shadow Fund was established by a professor at the Massachusetts School of Law to help veteran Marine Robert Burke, who planned to quit his job so he could access his 401-k plan to pay for his dog Shadow’s knee surgery.

Now, Dower and the rest of the pet owners who received help from Shadow’s Fund are trying to pay it forward to help other families in need.

Bulldog hot spots are painful and itchy areas caused by different factors. Also known as acute moist dermatitis, these hot spots suddenly show up on dog’s skin especially in areas that are prone to moisture, such as the neck, hips, and in between skin folds. Appearing as red and moist lesions, these patches often exude END_OF_DOCUMENT_TOKEN_TO_BE_REPLACED

This post is sponsored by Suchgood, however, all opinions are our own. One of the first times I took my bulldog out in public, a END_OF_DOCUMENT_TOKEN_TO_BE_REPLACED

I think we can all agree that bulldogs are some of the cutest dogs out there, and they’ve got hilarious personalities on top of that. END_OF_DOCUMENT_TOKEN_TO_BE_REPLACED