Texas Tech scientist  John McGlone formulated “Boar Mate” and “Stop That”, which are pig perfumes that may just help hyperactive dogs calm down. According to the research, using the perfume on dogs may just help stop them from doing unwanted behaviors such as excessive barking, frantic jumping and more. 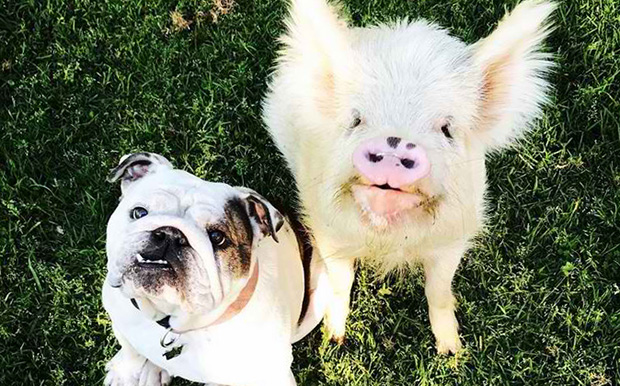 McGlone, who works in Texas Tech’s Animal and Food Sciences department of the College of Agriculture and Natural Sciences, came up with the formula after he decided to find ways to stop his Cairn Terrier Toto from barking too much.  He was amazed by the results after just one spritz of the pig perfume.

“One of the most difficult problems is that dogs bark a lot, and it’s one of the top reasons they are given back to shelters or pounds,” he wrote in a press release.

The key ingredient that makes the pig perfume effective in calming dog is called androstenone, which is a steroid and pheromone produced by male pigs. Thisis released in the male pig’s saliva and fat. It is what female pigs in heat find attractive. So that means a dog sprayed with the Pig Perfume should keep away from female pigs that are in heat. McGlone said androstenone smells pungent, but it can have an effect on mammal behavior.

Read: Bulldog Behavior and Temperament: How to Keep Your Canine Companion in Check

Together with his colleagues, McGlone tested the product on four different groups of dogs, who bark incessantly, in separate kennels.The group wanted to know not only if the pheromone affects the dogs, but if the spritzing startles the dogs as well.

“We sprayed it in their nose or toward their head while they were barking…barking and jumping, running back and forth,” McGlone said. “This whole behavior stopped. You could almost see them thinking, ‘What was that?’”

The product also had no effects on the heart rate of the dogs. With the findings, the researchers were led to believe that androstenoneis an intermone, which is a “pheromone in one species and has a behavioral effect in another species, but we do not know if it is a pheromone (naturally produced) in the other species.”

Aside from its effects on dog and pigs, the pheromone seems to have an effect on cats too.

“It’s best used as a training tool rather than a circus act to stop animals from doing what they’re doing,”McGlone said.

Bulldog hot spots are painful and itchy areas caused by different factors. Also known as acute moist dermatitis, these hot spots suddenly show up on dog’s skin especially in areas that are prone to moisture, such as the neck, hips, and in between skin folds. Appearing as red and moist lesions, these patches often exude END_OF_DOCUMENT_TOKEN_TO_BE_REPLACED

This post is sponsored by Suchgood, however, all opinions are our own. One of the first times I took my bulldog out in public, a END_OF_DOCUMENT_TOKEN_TO_BE_REPLACED

I think we can all agree that bulldogs are some of the cutest dogs out there, and they’ve got hilarious personalities on top of that. END_OF_DOCUMENT_TOKEN_TO_BE_REPLACED