What is cleft palate in dogs and why does it occur?

Cleft palate is a common occurrence in dogs. It occurs in all breeds and has an incidence rate of up to 25 percent. However, brachycephalic dogs breeds like Shih Tzus, Bulldogs, and Boxers have a 30% increased risk for developing this condition. 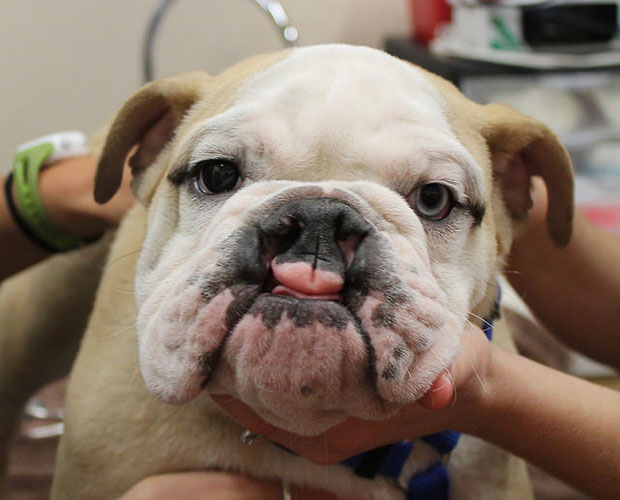 It is believed that cleft palate in dogs is an inherited condition. According to the Merck Veterinary Journal, the condition was first reported in Bulldogs in 1954. An investigation conducted in 1976 found that Bulldogs are at a high risk while cats, German Shepherds, and mixed breeds have lower rates of incidence.

The fact that Bulldogs descended from a very few ancestors – hence, smaller gene pool – may have contributed to this genetic problem.

Causes of Cleft Palate in Dogs?

Just like in humans, cleft palate in dogs occurs when roof of the mouth does not form properly during the mother dog’s pregnancy. Cleft palate occurs in puppies when the two sides of the palate – also called roof of the mouth—fail to form and fuse together during embryonic development, resulting to an opening between the puppy’s mouth and nasal passages. 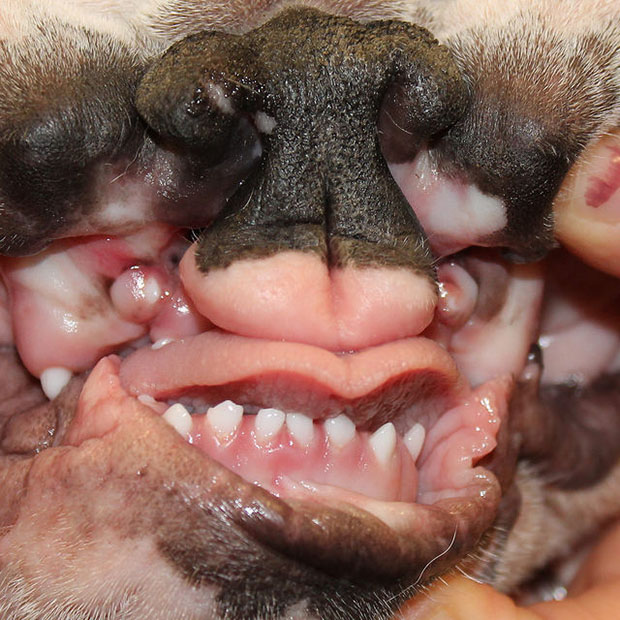 Cleft palate in dogs can also be resulted by the exposure of pregnant mother dogs to teratogenic chemicals – which can interfere with the normal development of the embryo –including excessive vitamins A and D, and griseofulvicin.

Symptoms of Cleft Palate in Dogs

Dogs with cleft palates may show the following symptoms:

To determine or confirm if your Bulldog has a cleft palate, it is best to take him to veterinarian.

Treatment for Dogs with Cleft Palates

Bulldogs or any dog with large cleft palates do not have the ability to eat normally. This hinders them from growing normally. Food and milk may enter into their nasal passages and go into their lungs, resulting in chronic nasal and sinus infections, and worse, pneumonia.

To treat this condition, affected puppies will need to have the cleft palate surgically repaired.

Care for Dogs with Cleft Palates

Since affected puppies are born with the defect, they are too young to undergo surgery. This means that they will need very special care for at least 3 months before the repair.

To do this, the caregiver must tube-feed the affected pup. Do note that puppies need to be fed eery 2 to 3 hours so that means there will be lots of sleeplessness night for the caregiver.

The tube must be put in the puppy’s mouth, down to the esophagus, and directly into the stomach. Another option is to get a really long nipple that can bring the food or water into the oro-pharynx.

Bulldog hot spots are painful and itchy areas caused by different factors. Also known as acute moist dermatitis, these hot spots suddenly show up on dog’s skin especially in areas that are prone to moisture, such as the neck, hips, and in between skin folds. Appearing as red and moist lesions, these patches often exude END_OF_DOCUMENT_TOKEN_TO_BE_REPLACED

This post is sponsored by Suchgood, however, all opinions are our own. One of the first times I took my bulldog out in public, a END_OF_DOCUMENT_TOKEN_TO_BE_REPLACED

I think we can all agree that bulldogs are some of the cutest dogs out there, and they’ve got hilarious personalities on top of that. END_OF_DOCUMENT_TOKEN_TO_BE_REPLACED