Canine distemper in Bulldogs turns more severe, as these brachycephalic dogs – with the short-broad skulls that make breathing a difficult process – are prone to respiratory distress. With no direct cure, it is hard to alleviate this deadly, systemic, and contagious viral disease and about 80% of puppies and 50% of adult dogs who contract this disease die. With preventive measures in place, you can safeguard your Bulldog from this fatal disease. 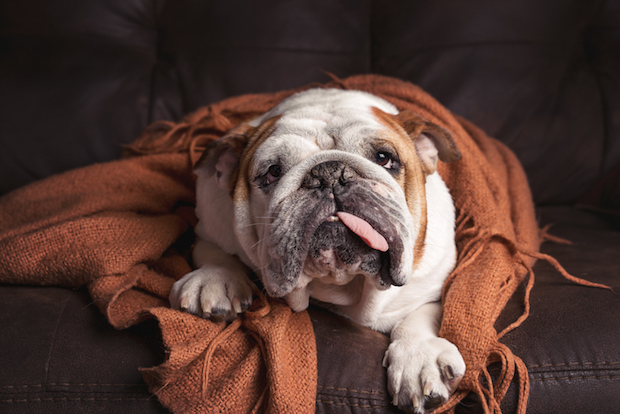 What is Canine Distemper in Bulldogs?

The contagious, viral disease is caused by the canine distemper virus, which belongs to the same family of virus (paramyxoviridae) that leads to measles in humans and Newcastle disease in birds. Canine distemper can kill dogs of all ages, but unvaccinated puppies face the most serious threat. It results in severe gastrointestinal and respiratory infections that lead to secondary bacterial infections and spreads to the spinal cord and brain.

What are the Signs and Symptoms of Canine Distemper in Bulldogs?

The incubation period for canine distemper is usually 1 to 2 weeks after a Bulldog gets infected. Symptoms start to show 2 to 5 weeks after the incubation. When the virus enters your Bulldog through his nose or mouth, it travels to the lymph nodes in the lungs before getting into the bloodstream. Once the nodes are overpowered, it invades other organs and body systems.

The mucosal stage is an early phase of canine distemper. During this phase, the virus starts attacking your Bulldog’s respiratory tract, causing yellow to green eye and nasal discharge. This symptom is very common and often mistaken as a simple respiratory infection. Your Bulldog may also experience fever sporadically. The virus then invades the gastrointestinal tract, causing your Bulldog to lose his appetite and suffer from diarrhea.

The following symptoms are visible in this phase.

The mucosal phase usually lasts for a week. The said symptoms may go away and the disease may enter a “latent” stage again.

After the mucosal phase, the disease progresses to the neurological phase, in which the virus enters the central nervous system. Because the virus attacks the nerves, your Bulldog may experience severe neurological symptoms including the following.

Your Bulldog’s footpads may also start to become hard. As the disease progresses, the infected Bulldog experiences paralysis that progresses from the rear limbs to the head. Death may also occur.

Why Do Bulldogs Experience Worse Symptoms of Canine Distemper?

Bulldogs have soft elongated palates and short noses. The structure of their skulls makes them predisposed to breathing problems. When a Bulldog catches the canine distemper virus, he may die within hours due to secondary respiratory issues.

How Can Your Bulldog Catch the Virus?

The canine distemper virus is airborne and transmitted by a disease-positive dog through sneezing, coughing, or sharing of food bowls. Dogs can also contract this disease when they come in contact with infected urine and feces. Even by merely being in the same room with a distemper-positive dog increases the risk.

How is Canine Distemper Diagnosed?

What is the Best Way To Prevent Canine Distemper in Bulldogs?

Vaccination is the most effective way to prevent canine distemper in Bulldogs. The CDV vaccine is considered a core vaccine and is a part of the 5-in-1 (DHLPP) combination vaccine that protects your Bulldog from canine distemper, hepatitis, leptospirosis, parainfluenza, and parvovirus.

The combination vaccine is usually given 3 to 4 times with two weeks intervals between each shot when your pet is a puppy. Booster shots are also recommended every 1 to 3 years depending on the prevalence of CDV and other diseases in your area.

But even with complete and updated vaccinations, there is still a very little chance for your Bulldog to catch the disease. That is why keeping your Bulldog’s immune system in good condition is important. Avoid taking your Bulldog out if there are cases of the disease reported in your area.

Is There a Cure for Canine Distemper?

There is no specific drug that can cure canine distemper. It has a high mortality rate, especially among unvaccinated puppies.

Years of research about canine distemper also led to the discovery and formulation of the different treatment options, such as

Manufactured immunoglobulins can help kill the virus in your pet. Canglob D and Polyglob are specifically created to strengthen the immune system and fight canine distemper virus. However, they are only effective when given during the early phase.

The use of Newcastle Disease Virus to treat Canine Distemper has always been controversial. Although there are many accounts of successful treatment, many veterinarians expressed their objection to this method because there is no legitimate study to back it up.

How is the Recovery From Canine Distemper?

If your Bulldog survives canine distemper, he must be kept away from other dogs for about 2 to 4 weeks because he may still be shedding the virus.

Dogs who reached the neurological phase may retain the involuntary movements, such as twitching and head bobbing for the rest of their lives. These dogs are prescribed Vitamin B complex supplements as long as they live.

Bulldog hot spots are painful and itchy areas caused by different factors. Also known as acute moist dermatitis, these hot spots suddenly show up on dog’s skin especially in areas that are prone to moisture, such as the neck, hips, and in between skin folds. Appearing as red and moist lesions, these patches often exude END_OF_DOCUMENT_TOKEN_TO_BE_REPLACED

This post is sponsored by Suchgood, however, all opinions are our own. One of the first times I took my bulldog out in public, a END_OF_DOCUMENT_TOKEN_TO_BE_REPLACED

I think we can all agree that bulldogs are some of the cutest dogs out there, and they’ve got hilarious personalities on top of that. END_OF_DOCUMENT_TOKEN_TO_BE_REPLACED