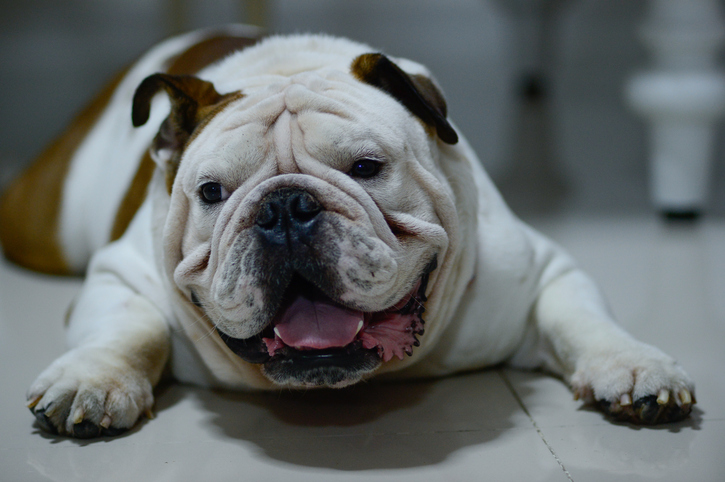 Obesity is especially detrimental for brachycephalic dogs, such as Pugs and Bulldogs. The structure of their skeletons and faces already makes it difficult for these dogs to breathe. Excess fat deposits in the chest and airways can further restrict their breathing. This can make them prone to respiratory diseases, including bronchitis.

If you have a fat Bulldog or one that is gaining a few extra layers of skin rolls, here are a few things you must know.

Signs Your Bulldog is Obese

To find out whether your Bulldog is obese, check for the following signs.

The body of a fat Bulldog has no defined shape

Bulldogs are naturally thick, stocky, and roundish to squarish in shape. For this reason, it can be difficult to determine whether your Bulldog is in good shape or not. However, dogs should have waists that are slightly slimmer than their hips. If your Bulldog looks like a chunky sausage, then he is definitely fat.

A fat Bulldog is often unable to scratch his own body

Breathing is even harder for a fat Bulldog

As a breed, Bulldogs have the tendency to snort and pant a lot. But if a Bulldog is fat, his airways tend to get narrower and saggier.

Bulldogs are notorious eaters, and they can be very greedy for food. On the other hand, Bulldogs are not known for their love for exercise. The imbalance between diet and lack of sufficient exercise is the main cause of obesity in Bulldogs. High-calorie food and frequent treats also contribute to their weight gain.

Hypothyroidism and neutering can also cause obesity in Bulldogs.

Bad Health Effects: A Fat Bulldog is prone to many diseases

Like an obese human being, a fat Bulldog is prone to the following health issues.

How to Deal with Bulldog Obesity

It can be difficult to make a fat Bulldog lose a few pounds. Because of their physical shape, forcing Bulldogs for hard and long exercises is strongly discouraged. But here are a few things you can do to help your fat Bulldog become fitter.

Bulldog hot spots are painful and itchy areas caused by different factors. Also known as acute moist dermatitis, these hot spots suddenly show up on dog’s skin especially in areas that are prone to moisture, such as the neck, hips, and in between skin folds. Appearing as red and moist lesions, these patches often exude END_OF_DOCUMENT_TOKEN_TO_BE_REPLACED

This post is sponsored by Suchgood, however, all opinions are our own. One of the first times I took my bulldog out in public, a END_OF_DOCUMENT_TOKEN_TO_BE_REPLACED

I think we can all agree that bulldogs are some of the cutest dogs out there, and they’ve got hilarious personalities on top of that. END_OF_DOCUMENT_TOKEN_TO_BE_REPLACED