Brace yourself for cuteness overload!

In this adorable video, a fearless Bulldog puppy plays with a bigger Bulldog!

See the pup play fight with the adult Bulldog – biting and ‘attacking’ his bigger and stronger brother. 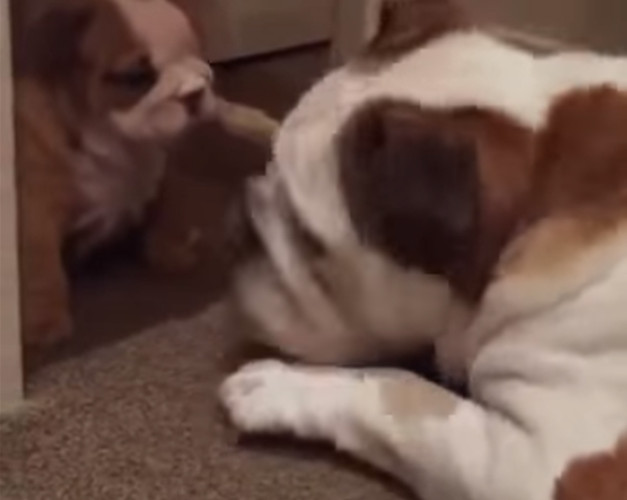 The older dog is up for the game too! He bites the pup in return – but oh so gently.

The Bulldog pup plays with so much enthusiasm that he tumbles a couple times!

I think we can all agree that bulldogs are some of the cutest dogs out there, and they’ve got hilarious personalities on top of that. That is why they need an adorable collar that’s perfect for them. It won’t just up their cuteness factor, though. Collars are also an important part of keeping our pets END_OF_DOCUMENT_TOKEN_TO_BE_REPLACED

Bulldogs are some of the kindest and relaxed dogs you can find. Don’t let their lazy demeanor fool you though, they actually love playtime. That END_OF_DOCUMENT_TOKEN_TO_BE_REPLACED

Have you ever wondered about the different bulldog types and where the originated from? Historically, “bulldog” refers to any dog that was used in the END_OF_DOCUMENT_TOKEN_TO_BE_REPLACED