The fly-biting syndrome in Bulldogs is a condition where in a dog appears to be snapping at non-existent flies or insects. Dogs who show this behavior are reported to be watching something near his face before suddenly biting or snapping at it. Studies indicate the possibility of various reasons, including behavior issues, partial seizure, canine epilepsy, and visual disturbances, underlining such behavior in your pet. 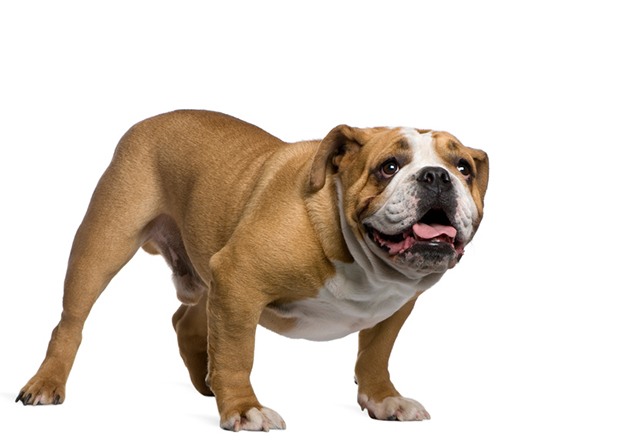 While snapping at flies is a common compulsive behavior dogs display sporadically, it could be concerning to see your pet doing it frequently and that too in the absence of any fly. Moreover, the fly-biting syndrome in Bulldogs may result in potential injuries when it continues for a long period of time and becomes an obsessive disorder.

Even veterinarians and dog behavior experts cannot pinpoint the exact cause of snapping so this condition. The fly-biting syndrome in Bulldogs may occur suddenly, and it is generally labeled as an idiopathic disorder. However, studies show that the following factors contribute to the problem in dogs.

Just like in humans, dogs’ eyes are filled with fluid. Sometimes, little chunks of deposits or condensation can be present in the fluid. These are called “vitreous floaters.” Many veterinarians opine that these eye floaters lead to a dogs’ random snapping at invisible flies.

Often a dog mistakes vitreous floaters appearing as spots to him as flies and snap at. Even minuscule debris in the eye fluid also causes a dog to see spots before his eyes and forcing him to do fly snapping.

Get your dog checked by a vet or dog ophthalmologist to rules out the cause.

The fly-biting syndrome in Bulldogs may also occur due to epileptic seizure. Hallucinations are possible indicators of epilepsy in humans and dogs too have them. This leads them to visualize as if a fly or something similar present before their eyes. As a result, your pet may try snapping at the hallucinated object.

However, it is difficult to verify if hallucination is the exact cause of the fly-biting syndrome. We cannot ask Bulldogs what they see or feel. Recording brain waves with an EEG during an episode of fly-biting is very hard to do because dogs aren’t comfortable with having electrodes stuck on their heads.

Surprisingly, all the seven dogs studied had some type gastrointestinal issues, such as

After receiving treatment for their GI problems, the fly-biting behavior was resolved in four cases. Two of them did not have fly-biting recurrence two checkups in the next 90 days following the treatment. Unfortunately, the two other dogs were not able to have their follow up evaluation because one had to be put down due to a degenerative joint disorder, while the other one encountered an accident and died.

One of the seven dogs was also diagnosed with Chiari malformation, a neurological disorder affecting the brain signals. The said dog responded to a medication used to treat seizures and nerve pain but not to GI treatment. Another dog showed a decrease in fly biting. The owners of the last dog were not able to follow the recommended diet and treatment so the fly-biting behavior remained.

Fly-Biting Syndrome in Bulldogs: What To Do, How To Care

If your Bulldog has visible signs of the fly-biting syndrome, you should get his health assessed. In case your pet is suffering from any health problem, make sure he is treated well for that specific disorder. Check if his fly-biting behavior is on the wane or resolved following the treatment.

Short occurrences of fly biting do not really harm your Bulldog. But if this behavior is visible over a longer period of time, your pet may strain his neck or experience other physiological issues. So, during your dog’s fly-biting moments, try distracting him by calling or petting him.

Using mental and physical exercises to keep your dog busy may also help prevent the fly-biting syndrome in Bulldogs.

Bulldog hot spots are painful and itchy areas caused by different factors. Also known as acute moist dermatitis, these hot spots suddenly show up on dog’s skin especially in areas that are prone to moisture, such as the neck, hips, and in between skin folds. Appearing as red and moist lesions, these patches often exude END_OF_DOCUMENT_TOKEN_TO_BE_REPLACED

This post is sponsored by Suchgood, however, all opinions are our own. One of the first times I took my bulldog out in public, a END_OF_DOCUMENT_TOKEN_TO_BE_REPLACED

I think we can all agree that bulldogs are some of the cutest dogs out there, and they’ve got hilarious personalities on top of that. END_OF_DOCUMENT_TOKEN_TO_BE_REPLACED