When our dogs create a mess it’s a huge headache, but what they do afterward it is sometimes just hilarious.

Watch as this honest Bulldog fesses up to his crime! 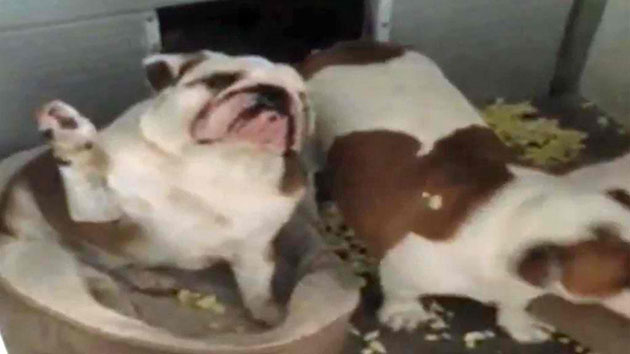 Somebody has de-fluffed a dog bed and one of three Bulldogs is the culprit.

“Who did this mess?” mom asks the three pooches.

“Was it you?” says mom pointing at the Bulldog on the left.

Watch: Funny Bulldog Searches For Dog In The Laptop And Ends Up Being Confused!

The guilty Bulldog then raises his paw admitting his crime.

Instead of getting punished, we think this dog probably got a reward for being so honest!

Bulldog hot spots are painful and itchy areas caused by different factors. Also known as acute moist dermatitis, these hot spots suddenly show up on dog’s skin especially in areas that are prone to moisture, such as the neck, hips, and in between skin folds. Appearing as red and moist lesions, these patches often exude END_OF_DOCUMENT_TOKEN_TO_BE_REPLACED

This post is sponsored by Suchgood, however, all opinions are our own. One of the first times I took my bulldog out in public, a END_OF_DOCUMENT_TOKEN_TO_BE_REPLACED

I think we can all agree that bulldogs are some of the cutest dogs out there, and they’ve got hilarious personalities on top of that. END_OF_DOCUMENT_TOKEN_TO_BE_REPLACED