Heat Stroke in Bulldogs and other brachycephalic dogs are pretty common especially during hot days. So as an owner of a Bulldog or other flat-faced dogs such as Pugs, Shih Tzus and Pekingese, you should be extra-careful. 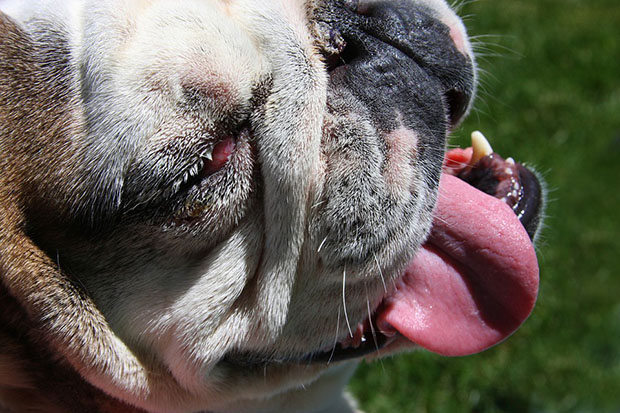 There are many factors that affect your Bulldogs likeliness to experience Heat Stroke such as:

A senior dog that loves resting in front of the AC often have less tolerance to heat compared to adolescent dogs. Youngsters and seniors are at highest risk. But no matter what age your Bulldog is or how healthy you think he is, it’s best to assume that all Bulldogs are at risk of suffering from Heat Stroke.

Signs of Heat Stroke in Bulldogs

Do note that Bulldog’s normal body temperature is 101 to 102 degrees. Your Bulldog may experience Heat Stroke after — or while in the middle of – different situations such as:

A Bulldog suffering from a heat stroke will show the following signs:

Read: Common Health Concerns for Bulldogs and How to Overcome Them

Dealing with Heat Stroke in Bulldogs

If your Bulldog is suffering from heat stroke, it is considered as an emergency situation and you must act fast. Pull his tongue out as far as you can to open and clear his airways – allowing him to breathe more cool air in. Give him cool water – not cold and freezing – to help lower his temperature. Do not force your Bulldog to drink if he doesn’t want to nor if he is unconscious as the water may just go into his lungs.

You may also rub ice cube on the tip of your Bulldog’s tongue – 10 seconds on and 10 seconds off. You can either hose your Bulldog or put him in a tub of cool water – again, not cold or freezing as the low temperature may constrict his blood vessels and slow down his cooling. Make sure to wet his belly and armpits’ skin and not just the fur. In really serious cases, put ice packs under his neck and front pits, and put wet towels on his body.

If those still don’t work, you may choose to do a cool water enema to cool your Bulldog from the inside. Use only cool water that is only a few degrees below your Bulldog’s body temperature. Also, do not induce the water rapidly or your Bulldog can go into serious shock.

As your Bulldog pants, his airways are also swelling. This causes him to paint harder and you have to break this cycle. You may choose to give your Bulldog Diphenhydramine or Benadryl via dropper. You must know the proper dosage your Bulldog needs. If you don’t, please call your vet. It’s also handy to keep an injectable Benadryl on hand.

Bulldog hot spots are painful and itchy areas caused by different factors. Also known as acute moist dermatitis, these hot spots suddenly show up on dog’s skin especially in areas that are prone to moisture, such as the neck, hips, and in between skin folds. Appearing as red and moist lesions, these patches often exude END_OF_DOCUMENT_TOKEN_TO_BE_REPLACED

This post is sponsored by Suchgood, however, all opinions are our own. One of the first times I took my bulldog out in public, a END_OF_DOCUMENT_TOKEN_TO_BE_REPLACED

I think we can all agree that bulldogs are some of the cutest dogs out there, and they’ve got hilarious personalities on top of that. END_OF_DOCUMENT_TOKEN_TO_BE_REPLACED