Idiopathic head tremors in Bulldogs are rarely life-threatening. This condition can affect any dog regardless of the breed. However, it is more commonly seen in English Bulldogs. 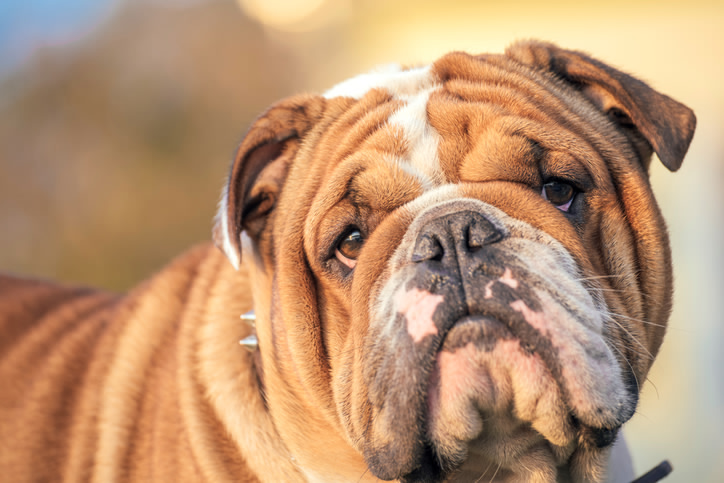 Here are seven important things you should know about head tremors in Bulldogs.

#1 Head tremors in Bulldogs are due to multiple reasons

If you often see your Bulldog shaking his head, take him to your vet for a checkup. While most cases of head tremors in Bulldogs are idiopathic, it is necessary to rule out potential health issues first. Your vet may suggest diagnostic tests, including blood tests, CT/MRI scan, and EEG.

#2 Idiopathic head tremors in Bulldogs last for a few minutes

When your Bulldog has an episode of head tremor, he shakes his head uncontrollably – like he is bobbing his head upward and downward. In rare cases, a Bulldog having head tremors may shake his head from side to side. An episode usually lasts up to 3 minutes. In affected dogs, head tremors may occur as often as several times a day or as rarely as just two to three times a year.

Idiopathic head tremors are seen in all breeds of dogs, including mixed ones. However, the condition is more widespread in Bulldogs, Labradors, Cavalier King Charles Spaniel, French Bulldogs, Greyhounds, Doberman Pinschers, and Boxers. In most cases, this condition occurs in Bulldogs aged between 6 months and 3 years.

#4 Head tremors are not painful

Dogs do not feel any pain when having head tremor episodes. Owners of dogs with idiopathic head tremors often report that their dogs stay aware and conscious during such episodes. Pets even respond to commands. Just make sure to take your Bulldog to a safe area to prevent him from receiving the head injury.

Your Bulldog he does not really feel any pain or discomfort during idiopathic head tremors. Despite knowing that the condition is generally harmless, it can make some dog owners panic and too much worried. When your Bulldog sees you panicking, he may feel more stressed – prolonging his head tremors.

Many owners of dogs with idiopathic head tremors report seeing their pets snap out of a head tremor spell when they remain focused. When you Bulldog is having a head tremor episode, try calling his name or making him obey commands, and rewarding him right after. You can also show a treat to you Bulldog to motivate him to focus away from the tremor. However, not all attempts to snap out your Bulldog from head tremors are successful.

The good news is that head tremors do not put your Bulldog’s life at risk. The condition also mellows down and may even go away with age. The best thing to do is to keep calm when your Bulldog has an episode of tremors. Distract him to snap your pet out of the involuntary movement by making him focus on something he desires, such as food and toys.

Bulldog hot spots are painful and itchy areas caused by different factors. Also known as acute moist dermatitis, these hot spots suddenly show up on dog’s skin especially in areas that are prone to moisture, such as the neck, hips, and in between skin folds. Appearing as red and moist lesions, these patches often exude END_OF_DOCUMENT_TOKEN_TO_BE_REPLACED

This post is sponsored by Suchgood, however, all opinions are our own. One of the first times I took my bulldog out in public, a END_OF_DOCUMENT_TOKEN_TO_BE_REPLACED

I think we can all agree that bulldogs are some of the cutest dogs out there, and they’ve got hilarious personalities on top of that. END_OF_DOCUMENT_TOKEN_TO_BE_REPLACED