Inducing vomiting in your Bulldog can be life-saving especially when he ingests poisonous substances. There are over 100,000 cases of pet poisoning reported in the United States each year. So, knowing the basics of how to make your Bulldog vomit in urgent situations is an essential part of pet care. 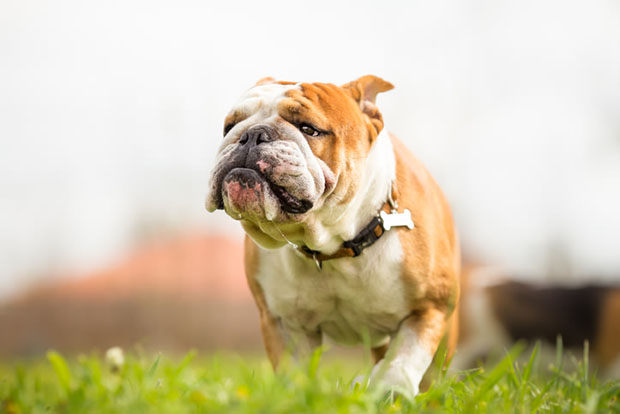 The ingestion of certain medicines, pesticides, poisonous plants, and home disinfectants can make your Bulldog sick. Even food items that you think are harmless, such as grapes, “sugarless” sweets, and avocado can put your Bulldog’s health and life at risk. The intake of any of these harmful items can make your Bulldog suffer from neurological and GI issues, respiratory distress, and heart problems that could lead to coma and death. Inducing vomiting in your Bulldog is the best way to save his life.

Is it acceptable to induce vomiting in your Bulldog?

No doubt inducing vomiting in your Bulldog is the first line of treatment to help your dog get rid of poisonous substance ingested. However, many argue that owners should avoid forcing Brachycephalic dog breeds, such as Bulldogs, to vomit. They cite the potential threat of respiratory distress.

However, your dog may face threat to his life if the poisonous substance ingested spreads inside the body. The only way to save your pet is to help him get rid of the harmful stuff. There is no other way to do it quicker than making your Bulldog vomit.

Inducing Vomiting in Your Bulldog: When Should Your Try

Avoid inducing vomiting in your Bulldog if he is unconscious or having unusual breathing issues. Again, vomiting may turn perilous if the substance swallowed is oil, corrosive, or has sharp edges. Unconscious dogs and dogs having seizures must not be forced to vomit. If your Bulldog has megaesophagus, laryngeal paralysis, or similar health issues, never try to make him vomit.

Check the container of the substance ingested. Do not induce vomiting if the information printed on the container advises against it.

You can give your Bulldog 0.5 to 1 ml of 3% hydrogen peroxide per pound of his body weight. But you should not give a dog more than 45ml at any one time.  Even if your Bulldog weighs 50 lbs or more, you must limit it to 45ml at a time.

Follow these steps while inducing vomiting in your Bulldog.

Things To Do After Inducing Vomiting in Your Bulldog

A visit to the veterinary clinic is a must after you make your Bulldog vomit. Bulldogs have an elongated palate and trying to make them vomit puts them at the risk of pneumonia. An evaluation by the vet after the incident makes sure that your pet suffered no respiratory problem after the incident and if there is any, the issue is attended to immediately.

Tests are often done to ensure that all or most of the poisonous object or substance had been let out, and see if the poison has caused damage to any organ. Activated charcoal is sometimes given to help flush out residual toxins left in your Bulldog’s body.

Bulldog hot spots are painful and itchy areas caused by different factors. Also known as acute moist dermatitis, these hot spots suddenly show up on dog’s skin especially in areas that are prone to moisture, such as the neck, hips, and in between skin folds. Appearing as red and moist lesions, these patches often exude END_OF_DOCUMENT_TOKEN_TO_BE_REPLACED

This post is sponsored by Suchgood, however, all opinions are our own. One of the first times I took my bulldog out in public, a END_OF_DOCUMENT_TOKEN_TO_BE_REPLACED

I think we can all agree that bulldogs are some of the cutest dogs out there, and they’ve got hilarious personalities on top of that. END_OF_DOCUMENT_TOKEN_TO_BE_REPLACED