Funny looks and amazing personalities: we love Bulldogs the way they are. The only problem is they have a lot of health issues. As lovers of the breed, we wonder: can we make Bulldogs a healthy breed? 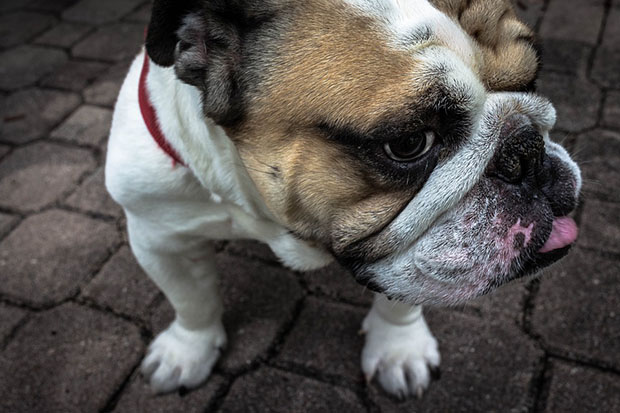 Flat-faced, round-bellied and wrinkly skinned, that’s what best describes the appearance of Bulldogs. They may be cute and funny and all but there lies a problem. Generations of inbreeding caused Bulldogs to be riddled with several health problems including breathing issues and skin problems.  Now, new research about Bulldogs has concluded that the only way to save the breed is to introduce broaden their genetic diversity.

The first (English) Bulldogs were first described in the 1630s and they surprisingly look very different from the modern Bulldogs we know today. The breed originated from a small genetic base with the founder population of only 68. And in 1835, the breed experienced a huge reduction in population size in an attempt to “develop” their desired physical traits including smaller tails, more skin folds, and shorter skulls. To achieve the look, some breeders resorted to inbreeding. And these methods may have been the reason why Bulldogs lack genetic diversity.

Bulldogs and Their Health Problems

Bulldogs aren’t the healthiest dogs and inbreeding – or mating them with their relatives – just made their health conditions worse. Because of their stout and cowering build, Bulldogs often need to be artificial inseminated to breed.

Newborn Bulldog puppies also have a high rate of mortality and birth defects such as cleft palate and Water Puppy Syndrome. Some Bulldogs are born with tongue larger than their mouth –making it even more difficult for them to breath.

The folds of the Bulldogs’ skins are also prone to sores and abscesses. Some of them are allergic to many things as well.

This breed has a life expectancy of 8 to 10 years – much shorter than the American Bulldogs or French Bulldogs, who usually live up to 12.

According to research published in the BioMed Central, it is probably not possible to improve the health of Bulldogs if the breeders are going to maintain the breed’s current characteristics and traits. The researchers, led by Dr. Niels Pedersen from Center for Companion Animal Health in University of California, examined the genes of about 100 Bulldogs living in the United States and they found out that 93% of the 44 male Bulldogs are all descendants of only 1 male while in females, 90% of them were found to be descendants of just 3 bitches.

The team of researchers concluded that this significant lack of genetic diversity was the result of “artificial genetic bottlenecks”. And the result is depressing: the average modern Bulldog puppy is “genetically equivalent to offspring of full sibling parents that came from a highly inbred subpopulation.”

How Can We Make Bulldogs A Healthy Breed?

With most – if not all – of the Bulldogs today having smaller genetic pool, the idea of seeking Bulldogs with healthier traits may not just work.

What do you think? What are your thoughts about this method?

I think we can all agree that bulldogs are some of the cutest dogs out there, and they’ve got hilarious personalities on top of that. That is why they need an adorable collar that’s perfect for them. It won’t just up their cuteness factor, though. Collars are also an important part of keeping our pets END_OF_DOCUMENT_TOKEN_TO_BE_REPLACED

Bulldogs are some of the kindest and relaxed dogs you can find. Don’t let their lazy demeanor fool you though, they actually love playtime. That END_OF_DOCUMENT_TOKEN_TO_BE_REPLACED

Have you ever wondered about the different bulldog types and where the originated from? Historically, “bulldog” refers to any dog that was used in the END_OF_DOCUMENT_TOKEN_TO_BE_REPLACED