Pyometra – “pyo” means pus and “metra” stands for uterus – refers to the thickening of the uterine lining and it leads to the accumulation of bacterial and infective fluid in the uterus. It is vital to treat pyometra in Bulldogs as soon as possible. The disease is a potentially fatal uterine infection that can affect all unspayed female dogs regardless of the breed. 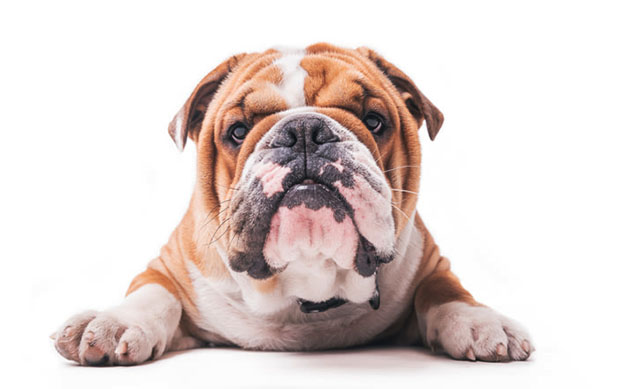 Pyometra in Bulldogs: The Physical Impact

When your Bulldog has pyometra, her uterus gets filled up with fluids and bacteria – causing her belly to enlarge. The bacteria inside the uterus release toxins as the disease progresses. These toxins are later absorbed into the blood leading to infection and kidney failure.

Pyometra in Bulldogs is of two types.

Causes of Pyometra in Bulldogs

Your Bulldog’s body stops white blood cells from entering the uterus when she starts going into heat. This allows sperm cells to enter the uterus without being attacked. While this is a normal mechanism of the reproductive system to promote conception, this prevents the body from fighting off possible infections.

A dog’s heat cycle comprises four stages – proestrus, estrus, diestrus, and anestrus. Dogs remain fertile during the estrus stage. When the diestrus phase sets in, the progesterone levels increase and remain high for up to 60 days. This causes the uterine lining to thicken. The high levels of progesterone also make the uterus conducive for pregnancy and fetal development.

If a female does not get pregnant for many consecutive cycles, the uterine lining continues to become excessively thick. When that happens, your Bulldog may develop cystic endometrial hyperplasia, a condition wherein cysts start growing from within the tissues. When the lining of the uterus becomes thickened and cystic, it produces fluids that make itself an ideal breeding ground for bacteria.

Pyometra in Bulldogs can happen 2 to 8 weeks after her heat cycle. From estrus to diestrus, the cervix remains open to let sperms inside the uterus. Because the cervix is open, bacteria like the E. Coli can enter inside the uterus. Normally, the body expels such bacteria on its own. But without white blood cells, the body cannot counter the bacteria. The heightened progesterone level and thickening of the uterine lining also make it hard for the body to contract and expel the harmful invaders. As the thick and cystic uterine lining produces fluids that create a good breeding ground for bacteria, severe infection often follows.

Dogs with pyometra show one or more of the following symptoms.

Pyometra in Bulldogs: The Treatment

Before the treatment, your veterinarian may perform a series of tests on your Bulldog to confirm if the clinical signs are linked to pyometra. Apart from ultrasound and blood tests, he may suggest an x-ray of your Bulldog’s belly to confirm the diagnosis.

The most common and effective way to prevent pyometra in dogs is spaying. Prior to and after surgery, your Bulldog will be put on a drip.

Your Bulldog is also prescribed antibiotics and pain reliever after the procedure. Most veterinarians recommend spaying female dogs with pyometra, as it is the fastest and most effective way to treat the infection. The complete removal of the uterus prevents the chance of its recurrence. However, there is a condition called “stump pyometra” in female dogs left with small parts of their uterus even after hysterectomy. But since the remaining part of the uterus is small, the condition and the signs it shows tend to be less severe. Treatment is still needed to prevent complications.

This option is often preferred by many breeders when the dog is deemed very important because of her lineage and titles. Some owners choose this type of medical treatment over spaying, as it does not affect the reproductive ability of a dog.

How To Prevent Pyometra in Bulldogs

Unfortunately, there is no effective way to prevent pyometra in dogs except spaying. Remember, it is best to have your Bulldog spayed while she is healthy. But make sure that your Bulldog has fully grown before having the procedure done to avoid problems associated with her growth and physical development.

I think we can all agree that bulldogs are some of the cutest dogs out there, and they’ve got hilarious personalities on top of that. That is why they need an adorable collar that’s perfect for them. It won’t just up their cuteness factor, though. Collars are also an important part of keeping our pets END_OF_DOCUMENT_TOKEN_TO_BE_REPLACED

Bulldogs are some of the kindest and relaxed dogs you can find. Don’t let their lazy demeanor fool you though, they actually love playtime. That END_OF_DOCUMENT_TOKEN_TO_BE_REPLACED

Have you ever wondered about the different bulldog types and where the originated from? Historically, “bulldog” refers to any dog that was used in the END_OF_DOCUMENT_TOKEN_TO_BE_REPLACED