Are you planning to have your Bulldog spayed? Spaying is one of the most effective ways to control the pet population. Not only spaying in dogs is critical in promoting pet birth control, but it also comes with health benefits. However, the procedure may come with some health risks, too. 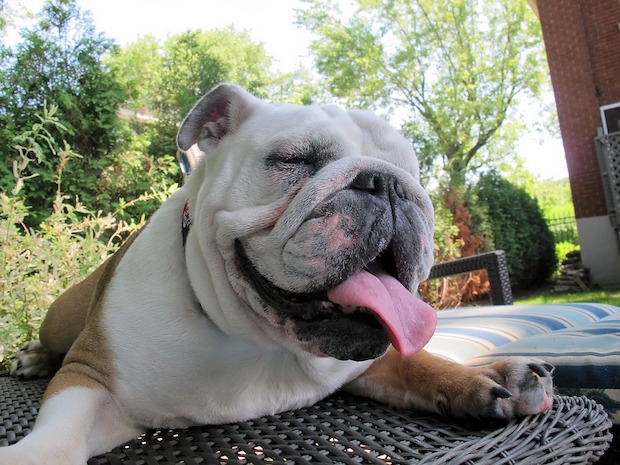 Benefits that Come with Spaying Your Bulldog

Ovariohysterectomy is the medical term for spaying. This surgical procedure involves the removal of the uterus and ovaries of a female dog. The procedure comes with some benefits including:

Things can get messy and rowdy when your Bulldog goes into heat. There will be droplets of blood on the floor, furniture, carpets, beddings – everywhere. Heat periods or estrus in dogs can last as long as three weeks. This means you’ll see blood droplets everywhere unless your Bulldog is comfortable wearing a nappy. The heat may also come with a specific bloody smell.

Speaking of smell, male dogs get attracted to this smell. Intact male dogs in your household – and even your neighborhood – will persistently follow your female to try and mate with her. This could be a problem since the male dogs have the tendency to fight against each other in order to “win” and mate with female-in-heat. By having your Bulldog spayed, these problems can be eliminated.

Prevents Your Bulldog from Breeding

When your Bulldog gets spayed, her ovaries and uterus are removed. This means your Bulldog will no longer be able to bear puppies and give birth. Bulldogs can be pretty hard to breed as they come with different health issues that may get aggravated with pregnancy. So if you do not have plans to breed, then spaying may be beneficial.  By spaying your Bulldog, homeless dogs can have more chances of finding their forever homes.

Health Benefits of Spaying Your Bulldog

Spaying comes with different health benefits for your Bulldog including:

Intact female dogs may experience false pregnancy – a condition wherein the body makes itself believe that it is pregnant. This causes belly and breasts to grow bigger. In some cases of false pregnancy, the dogs become temporarily aggressive as they try to protect an object believing it is her offspring.

Pyometra is an infection of the uterus. The condition involves the thickening of the uterus, which leads to the accumulation of pus and bacteria. It can cause blood poisoning, kidney failure, and death.

Hormones play a vital part in the growth mammary glands. Without the primary source of female hormones, which is the ovaries, the risk of a dog to develop mammary cancer decreases.

Problems That May Come After Spaying Dogs

Spaying your Bulldog comes with a number of health benefits but it comes with risks too. And here are some of them:

Having your Bulldog spayed can alter her hormonal make up and metabolism – making her prone to weight gain and obesity. It certainly does not help the fact that Bulldogs as a breed are already prone to being obesity. They are also at risk of developing health issues including Hip Dysplasia, heat intolerance, and breathing problems – and obesity can make these conditions worse. Obesity can also increase the chance of Arthritis, Heart Disease, Pancreatitis, Diabetes, and more.  This side effect of spaying can be controlled by changing your Bulldog’s diet and feeding regimen.

When a dog gets spayed, the ovaries – one of the primary sources of hormones – are removed. The loss or decrease of hormones is seen to upset the dog’s endocrine system – potentially causing Hypothyroidism that leads to weight gain and inactivity. This problem can be dealt with using maintenance thyroid supplement.

When your Bulldog is to undergo a spay surgery, she will need to be put under anesthesia. This could cause worries because some dogs do not wake up after being under general anesthesia.

Records show that about 20% of spay surgeries have at least one complication like abscess, infections, and bad reaction to the anesthesia. Only less than 5% of these cases are serious and only about 1% of dogs who went under anesthesia result to death.

Should You Have Your Bulldog Spayed?

Spaying your Bulldog has a lot of benefits, but it has its cons as well. Weigh the pros and cons of spaying while considering the lifestyle you want for yourself and your Bulldog.

If you’re leaning on having your Bulldog spayed but are worried about the risks, there are ways to lessen them or minimize their effects.

Bulldog hot spots are painful and itchy areas caused by different factors. Also known as acute moist dermatitis, these hot spots suddenly show up on dog’s skin especially in areas that are prone to moisture, such as the neck, hips, and in between skin folds. Appearing as red and moist lesions, these patches often exude END_OF_DOCUMENT_TOKEN_TO_BE_REPLACED

This post is sponsored by Suchgood, however, all opinions are our own. One of the first times I took my bulldog out in public, a END_OF_DOCUMENT_TOKEN_TO_BE_REPLACED

I think we can all agree that bulldogs are some of the cutest dogs out there, and they’ve got hilarious personalities on top of that. END_OF_DOCUMENT_TOKEN_TO_BE_REPLACED