Bulldog Refuses to Wake Up 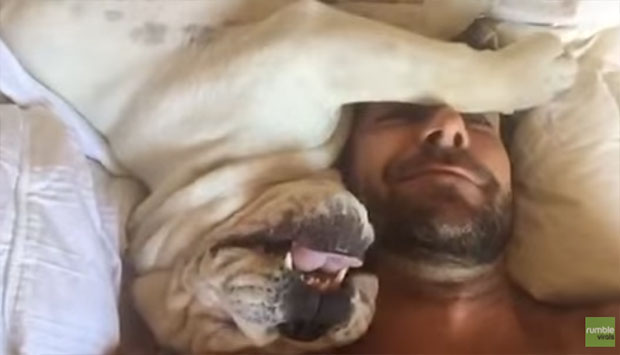 https://www.youtube.com/watch?v=Mb37rSWMqcc This is Buddha! Watch as this grumpy Bulldog makes funny sounds as he protests against waking up! If there's something Bulldogs love doing besides eating, it is sleeping and Bulldog cannot help but show everybody this side. The sun is already shining, and his mum and dad are already awake. It seems that dad wants to get up already but since big Buddha is leaning on his head, he cannot simply get up! Dad tries to gently wake Buddha up but the silly Bulldog won't get up. Not only would the Bulldog refuse to rise and shine, silly Buddha also releases hilarious sounds as if telling his humans that he is not pleased with them waking him up. Watch: Bulldog Smells A Treat While He Sleeps And Decides To Eat It In His Dream! Oh dear. ... END_OF_DOCUMENT_TOKEN_TO_BE_REPLACED

I think we can all agree that bulldogs are some of the cutest dogs out there, and they’ve got hilarious personalities on top of that. That is why they need an adorable collar that’s perfect for them. It won’t just up their cuteness factor, though. Collars are also an important part of keeping our pets END_OF_DOCUMENT_TOKEN_TO_BE_REPLACED

Bulldogs are some of the kindest and relaxed dogs you can find. Don’t let their lazy demeanor fool you though, they actually love playtime. That END_OF_DOCUMENT_TOKEN_TO_BE_REPLACED

Have you ever wondered about the different bulldog types and where the originated from? Historically, “bulldog” refers to any dog that was used in the END_OF_DOCUMENT_TOKEN_TO_BE_REPLACED