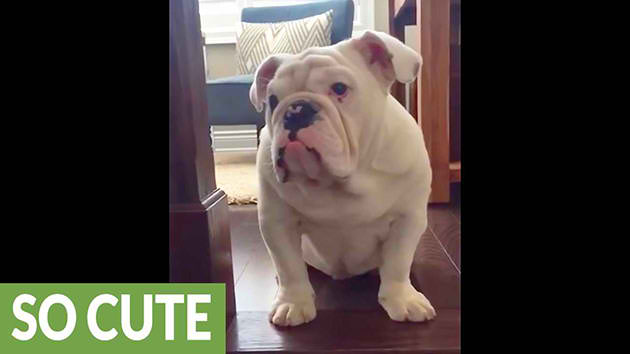 https://youtu.be/qetS9dKV2vM The expressive Bulldog has a problem – a very scary one – the stairs! Watch as this Bulldog finally conquers the scary stairs! This adorable pup’s name is Brick and his owner is coaxing him down the stairs. Brick doesn’t think this is a good idea at all. The pooch is perched at the top of the stairs looking down. His expression says, “You’ve gotta be joking, I’m not going down there!” His whines and complaints are too adorable for words. The grumpy Bulldog face says it all. Watch: Silly Bulldog Won’t Let Brother Go For A Swim! Funny Bulldog Video! After lots and lots of encouragement from mom, the Bulldog gathers his inner strength and cautiously puts his paws down the first step. “Hmm. This isn’t so bad,” the Bulldog probably thinks ... END_OF_DOCUMENT_TOKEN_TO_BE_REPLACED

I think we can all agree that bulldogs are some of the cutest dogs out there, and they’ve got hilarious personalities on top of that. That is why they need an adorable collar that’s perfect for them. It won’t just up their cuteness factor, though. Collars are also an important part of keeping our pets END_OF_DOCUMENT_TOKEN_TO_BE_REPLACED

Bulldogs are some of the kindest and relaxed dogs you can find. Don’t let their lazy demeanor fool you though, they actually love playtime. That END_OF_DOCUMENT_TOKEN_TO_BE_REPLACED

Have you ever wondered about the different bulldog types and where the originated from? Historically, “bulldog” refers to any dog that was used in the END_OF_DOCUMENT_TOKEN_TO_BE_REPLACED