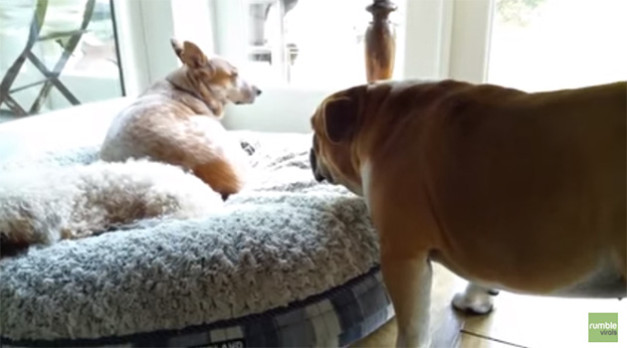 https://youtu.be/UWYY7Rgln_4   In this hilarious video, a grumpy Bulldog throws a tantrum after another dog steals his bed. The Bulldog loves his bed – it’s soft and comfy, and close to the window too! The Bulldog can sunbath and has a good view of his property. His canine buddies have stolen his bed and the Bulldog is extremely unhappy! Releasing angry grunts – Grrrr! Grrr! Grrrr – the Bulldog makes his feelings known! The pooch sure sounds funny! Most of his discontent is directed at the Corgi mix – he wants the pup to leave his spot immediately! The Bulldog does not seem to mind the Poodle peacefully sleeping on his bed. Watch: Funny Bulldog Finally Conquers The Scary Stairs! The Bulldog grunts and grunts and turns to his owner for help when the Corgi ... END_OF_DOCUMENT_TOKEN_TO_BE_REPLACED

I think we can all agree that bulldogs are some of the cutest dogs out there, and they’ve got hilarious personalities on top of that. That is why they need an adorable collar that’s perfect for them. It won’t just up their cuteness factor, though. Collars are also an important part of keeping our pets END_OF_DOCUMENT_TOKEN_TO_BE_REPLACED

Bulldogs are some of the kindest and relaxed dogs you can find. Don’t let their lazy demeanor fool you though, they actually love playtime. That END_OF_DOCUMENT_TOKEN_TO_BE_REPLACED

Have you ever wondered about the different bulldog types and where the originated from? Historically, “bulldog” refers to any dog that was used in the END_OF_DOCUMENT_TOKEN_TO_BE_REPLACED