Bulldogs are known for their perennial frown, stocky and sturdy physique, and snubbed-noses. But another recognizable body part of the Bulldog is their tail. Sometimes, Bulldogs can appear tailless. That little stump in their rear end is not docked unlike in other breeds such as Doberman Pinschers and Rottweilers. 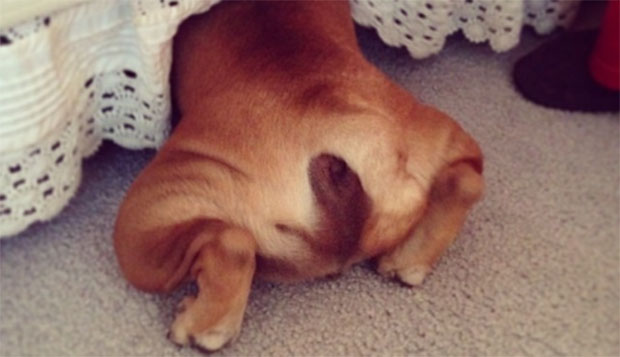 Here are some shapes of Bulldog tails.

When a Bulldog puppy is born, his tail is already starting to resemble what it will look like when he grows into an adult. According to the American Kennel Club, the straight tail and the corkscrew-shaped tails are the most desirable. A newborn Bulldog puppy’ straight tail is soft. It is broad at the base and tapers down to a short and triangular tip.

At birth, corkscrew tails look wrapped but are still flexible. As the Bulldog puppies grow, their tails will stiffen in the same position – looking like cinnamon rolls stuck on Bulldogs’ behinds.

For the American Kennel Club, Bulldog tails that are long and wavy are considered faulty. The great news is the shape of Bulldog tails has no correlation with their wonderful personality. As long as you don’t plan to join conformation shows, long-tailed Bulldogs will make awesome companions and best friends like any other Bulldogs.

Bulldog tails and the surrounding area must always be kept clean –especially Bulldogs with corkscrew tails. Neglecting the tail and the rear end can cause future health problems such as infections and irritation.

To avoid this, make sure the dimpled area under your Bulldog’s tail is always clean. Wipe off debris and gunk using unscented baby wipes or damp washcloth. Then, dry the area with a soft absorbent tissue or towel.

Keeping Bulldog tails and surrounding area clean by rinsing with warm water is also a good idea. If you notice an unusually foul smell coming from your Bulldog’s rear end – especially if the area seems irritated and sensitive – then a trip to the vet may be necessary.

Bulldog tails may be removed but only if the veterinarian recommends so. If a Bulldog’s tail interferes with his ability to go potty and has been suffering from recurrent infections, the veterinarian may suggest having the tail removed. This problem is often seen in Bulldogs with corkscrew tails.

Bulldog hot spots are painful and itchy areas caused by different factors. Also known as acute moist dermatitis, these hot spots suddenly show up on dog’s skin especially in areas that are prone to moisture, such as the neck, hips, and in between skin folds. Appearing as red and moist lesions, these patches often exude END_OF_DOCUMENT_TOKEN_TO_BE_REPLACED

This post is sponsored by Suchgood, however, all opinions are our own. One of the first times I took my bulldog out in public, a END_OF_DOCUMENT_TOKEN_TO_BE_REPLACED

I think we can all agree that bulldogs are some of the cutest dogs out there, and they’ve got hilarious personalities on top of that. END_OF_DOCUMENT_TOKEN_TO_BE_REPLACED