This Bulldog is such a heavy-sleeper he can balance food over his chin while sleeping! 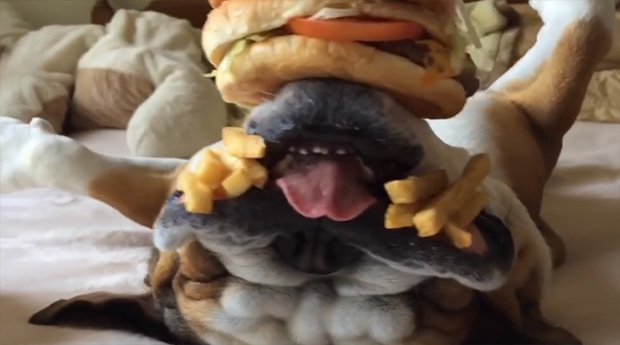 Like most Bulldog’s he’s a notorious sleeper but what he lacks in activity, he makes up for his talents — talents we aren’t sure he knows about.

Watch: Fun-loving Bulldog Plays In The Mud And Digs Away!

In this video, you’ll see Monkey sleeping with his belly up. His owners then stacks a tower of cheeseburgers on top of his chin. If that’s not enough, the amused owner also put fries on his flews.

Even that much weight and tasty smell isn’t enough for this cutie to wake up and gobble them all.

What a funny Bulldog!

Bulldog hot spots are painful and itchy areas caused by different factors. Also known as acute moist dermatitis, these hot spots suddenly show up on dog’s skin especially in areas that are prone to moisture, such as the neck, hips, and in between skin folds. Appearing as red and moist lesions, these patches often exude END_OF_DOCUMENT_TOKEN_TO_BE_REPLACED

This post is sponsored by Suchgood, however, all opinions are our own. One of the first times I took my bulldog out in public, a END_OF_DOCUMENT_TOKEN_TO_BE_REPLACED

I think we can all agree that bulldogs are some of the cutest dogs out there, and they’ve got hilarious personalities on top of that. END_OF_DOCUMENT_TOKEN_TO_BE_REPLACED