Do you remember what you felt the first time you saw your newborn daughter, son, or sibling?

Yep, dogs feel it too.

Feel your hearts melt as a tough Bulldog father softens up seeing his puppy daughter for the first time!

While lounging on the couch, the father Bulldog can be seen looking at his daughter so fondly.

The little pup is busy investigating the corners of the couch and it seems that the presence of a much bigger Bulldog doesn’t bother her. 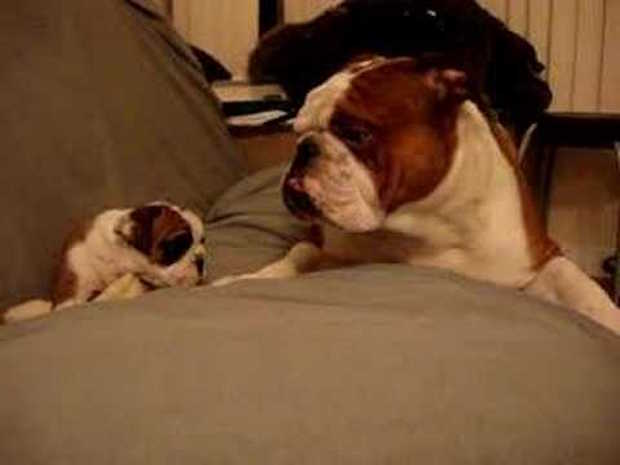 An adorable sniffing session ensues followed by a bit of play-bites courtesy of none other than the tough little puppy herself!

The father-daughter duo then shifts into play mode. Both Bulldogs hop and bounce – inviting each other to play.

I think we can all agree that bulldogs are some of the cutest dogs out there, and they’ve got hilarious personalities on top of that. That is why they need an adorable collar that’s perfect for them. It won’t just up their cuteness factor, though. Collars are also an important part of keeping our pets END_OF_DOCUMENT_TOKEN_TO_BE_REPLACED

Bulldogs are some of the kindest and relaxed dogs you can find. Don’t let their lazy demeanor fool you though, they actually love playtime. That END_OF_DOCUMENT_TOKEN_TO_BE_REPLACED

Have you ever wondered about the different bulldog types and where the originated from? Historically, “bulldog” refers to any dog that was used in the END_OF_DOCUMENT_TOKEN_TO_BE_REPLACED