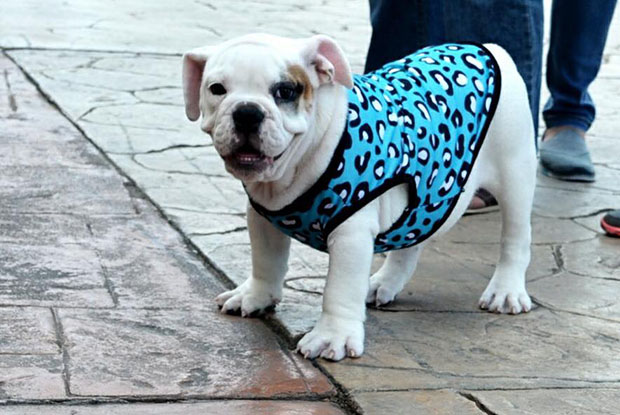 How often do puppies go potty?

First things first. Knowing how often puppies pee or poop is essential in training your Bulldog puppy to pee or poop outside. Puppies have small bladders and that means they have to pee more often than adults. Depending on their age, Bulldog puppies need to relieve themselves every 2 to 3 hours and yes, this means you’ll need to take your little precious Bulldog outside several times a day.

Read: Why Do Dogs Dig? Is Your Bulldog A Digger?

What are the signs your Bulldog is going to pee?

Both young pups and adult dogs feel the urge to pee and poop after their meal. But since young puppies need to go more often, this means they will need to go out in between those times.

When your Bulldog puppy is about to pee, he may show the followingsigns:

The signs mentioned above can happen in just seconds so keep an eye on your Bulldog’s actions. However, some puppies do not show signs as they do not feel that sensation until they grow bigger and older.

Is there any reason why a Bulldog may refuse to pee or poop outside?

Yes, there are different reasons why a Bulldog refuses to relieve himself outside. It could be because of fear, preference or the weather.

Tips in Training Your Bulldog Puppy to Pee Outside

To train your Bulldog puppy to pee outside, you will need to go with him and give him company outside. Puppies can get scared of being alone. Besides, when they do pee and poop, they feel very vulnerable so leaving him alone on him may just cause him to run back and scratch up your door in an attempt to go back inside. He might get stolen, too.

By keeping your Bulldog company, you are assuring him that you have his back – making him feel at ease as he learns to relieve himself outside.

Do not get mad if your Bulldog takes a long time getting used to the feeling outside. After he does his business, wait for another 10 to 15 minutes to make sure he has let it all out.

Your Bulldog may also refuse to go out when it’s cold outside so training him to pee on a designated rug or potty trainer can be useful.

Bulldog hot spots are painful and itchy areas caused by different factors. Also known as acute moist dermatitis, these hot spots suddenly show up on dog’s skin especially in areas that are prone to moisture, such as the neck, hips, and in between skin folds. Appearing as red and moist lesions, these patches often exude END_OF_DOCUMENT_TOKEN_TO_BE_REPLACED

This post is sponsored by Suchgood, however, all opinions are our own. One of the first times I took my bulldog out in public, a END_OF_DOCUMENT_TOKEN_TO_BE_REPLACED

I think we can all agree that bulldogs are some of the cutest dogs out there, and they’ve got hilarious personalities on top of that. END_OF_DOCUMENT_TOKEN_TO_BE_REPLACED