Known as pseudocyesis or pseudopregnancy, false pregnancy in Bulldogs is characterized by changes in the body and behavior of a female dog that resembles pregnancy. Bulldogs have big tummies whether they are male or female. Because of the shape of their bellies, some Bulldogs – especially the females – appear pregnant during their estrus. This misleads an owner to think that his pet is pregnant. 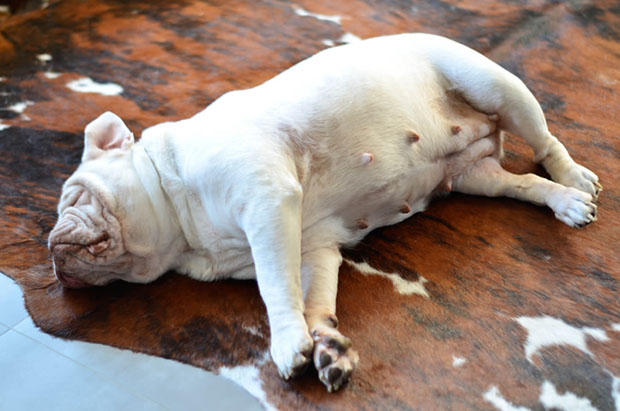 Identifying false pregnancy in Bulldogs is not that difficult if you know your pet’s health and reproduction history. Signs of such pregnancy are similar to signs displayed by a pregnant dog except for one thing that there is no real embryo inside the uterus.

During her heat cycle, a Bulldog undergoes through four stages – proestrus, estrus, diestrus, and anestrus. The first three stages are the active stages, in which ovarian activity and hormonal changes are the most evident. Your Bulldog’s vulva swells resulting in bloody discharge. She can become pregnant if she mates with a male dog during the estrus stage that lasts for about 9 days. During diestrus, your Bulldog may show physical and behavioral changes resembling pregnancy even if she is not pregnant.

Signs of False Pregnancy in Bulldogs

You may find it difficult to differentiate false pregnancy in Bulldogs solely based on signs, as these are very similar to those shown by a pregnant dog. Your pet is likely to have

Causes of False Pregnancy in Bulldogs

The ovaries contain follicles or fluid-filled sacs that hold immature eggs. During the estrus stage, your Bulldog’s ovaries release mature egg cells that are ready to be fertilized. A part called corpus luteum remains inside the follicle even after the egg is released. When the diestrus stage begins, the corpus luteum produces progesterone to prepare the body for pregnancy and support the development of embryos. This makes your Bulldog’s body is hormonally prepared for pregnancy whether her eggs are fertilized or not.

If your Bulldog gets pregnant, other hormones eventually take over her body to keep the corpus luteum throughout the pregnancy. The corpus luteum quickly disappears after your pet gives birth to puppies.

However, if no egg is fertilized, the corpus luteum normally remains active for days before it fades away. As long as this hormone is active, the body stays in a heightened state prepared to become pregnant. This results in the physical display of pregnancy signs in her body even though your pet is not pregnant.

False Pregnancy in Bulldogs: How To Identify

The veterinarian may ask about your Bulldog’s health history, her last heat cycle, changes in behavior, and if there are any male dogs in your household or nearby houses. A physical exam is also done to determine if your Bulldog’s body is showing signs of pregnancy.

Blood tests, radiographs, and an abdominal ultrasound may also be done to determine whether your Bulldog is pregnant.

False pregnancy usually resolves on its own. Symptoms, including discomfort and anxiety, may be eased using medication. Walking and engaging in physical and mental activities also help ease anxiety associated with it.

False pregnancy normally fades after 21 days. In some cases, it lasts up to a month or more. If your Bulldog retains her “motherhood” behaviors after 8 weeks, take her to the veterinarian for a check-up.

Spaying is advised if your Bulldog suffers from recurrent false pregnancy.

False Pregnancy in Bulldogs: What Can You Do To Help Your Bulldog

When a dog is having a false pregnancy, she tends to care for objects, such as stuffed toys and pillows, and treat them as her own puppies. Do not take her “surrogate pups” away. Doing so only increases her anxiety. Instead of taking her phantom puppies away, let her nurse them until she gets tired of them.

Walking your Bulldog keeps her in good shape and physical activity can help take her mind off her “pregnancy symptoms” – keeping her anxiety at bay.

Be Patient with Your Bulldog

Your Bulldog may either become overly affectionate toward you during false pregnancy. She might ask you to pet her more and demand your attention every now and then.

Your Bulldog may also show aggression to protect objects of her liking. Do not punish her if she growls or barks at you. Such aggression typically dissipates after a couple of weeks.

I think we can all agree that bulldogs are some of the cutest dogs out there, and they’ve got hilarious personalities on top of that. That is why they need an adorable collar that’s perfect for them. It won’t just up their cuteness factor, though. Collars are also an important part of keeping our pets END_OF_DOCUMENT_TOKEN_TO_BE_REPLACED

Bulldogs are some of the kindest and relaxed dogs you can find. Don’t let their lazy demeanor fool you though, they actually love playtime. That END_OF_DOCUMENT_TOKEN_TO_BE_REPLACED

Have you ever wondered about the different bulldog types and where the originated from? Historically, “bulldog” refers to any dog that was used in the END_OF_DOCUMENT_TOKEN_TO_BE_REPLACED