Bulldogs are wonderful dogs with amazing personalities – and owning them can add to an aura of grandeur to your social status. These pets are arguably the most expensive dogs to own.

Because of their unique looks and dominant personalities, Bulldogs are always on top of the AKC’s list of the most popular dog breeds. Simply put, they are overwhelming to look at and amazing to be with. 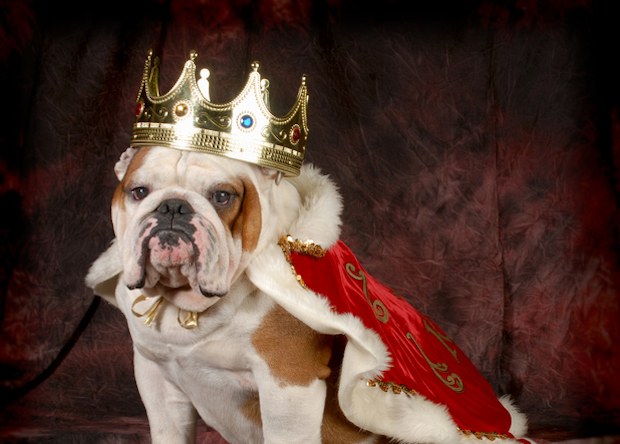 Bulldogs are not the most expensive dogs to buy, but yet costly to own

Currently, purebred Bulldog puppies are sold between $1,500 and $30,000 in the United States. That’s more or less twice the price of a Labrador Retriever, the most popular dog breed in the country. A purebred Lab puppy costs between $800 and $1200. For further comparison, here are a few more popular dog breeds and their average selling price.

Why do bulldog puppies cost so much?

Bulldogs are one the most expensive dogs to buy but their cost varies depending on their color and quality. A Bulldog puppy commands such a high price because of the following factors.

Bulldog breeders face a lot of issues during the breeding. Bulldogs have been tagged as an unhealthy breed because they are prone to a number of health issues. They suffer from Brachycephalic syndrome and are prone to hip dysplasia, progressive retinal atrophy, cystinuria, and more.

Responsible Bulldog breeders ensure that their dogs have proper health screenings for genetic issues before deciding to breed them. Prior to mating their dogs or artificial insemination, good breeders also make certain that the female dog is in good condition with on-schedule vaccinations, heartworm preventative, and deworming. These accumulated expenses on preparing dogs for breeding cost breeders significantly.

Most Bulldogs cannot deliver puppies normally and c-section is required because of the following reasons:

The accumulative expenses of a Bulldog’s pre-birth needs can be very costly. Hence, it is advisable not to breed if you are not ready to handle the expenses.

The expenditures and care go up after the puppies are born. Breeders devote a lot of their time taking care of the newborn Bulldogs and their mother. They have to spend on supplements, high-quality food, milk replacements, and other puppy products to ensure both the mother and puppies stay healthy.

Bulldogs don’t really make the best mothers since they tend to roll over their puppies – suffocating them. For this reason, it is necessary to constantly watch the mother Bulldog and her pups.

The breeder usually takes care of the puppies for at least 8 weeks. Puppies need weekly veterinary appointments to check their health and undergo deworming sessions. Most responsible breeders make sure that the puppies receive at least one shot of the core vaccines before sending them to their new families.

The cost of healthcare makes Bulldogs the most expensive dogs to own. They are prone to many health issues. Ask any Bulldog owner and many of them would tell you about different health issues their pets get from time to time.

The most common health issues Bulldog owners are concerned about are the yeast infection, cherry eyes, digital cysts, head tremors, and skin infection. Treatment and preventive checkups increase the cost of looking after these dogs.

A cheap Bulldog – unless you know that the person you’re buying from is a responsible owner – comes with a lot of health issues. Most of them can cost you thousands of dollars in vet bills.

Although pet stores sell Bulldogs that are of the same price range claiming that they have well-bred Bulldogs, it is still better to get puppies directly from reputable breeders.

This is because most pet stores get their puppies from puppy mills, where many dogs are abused and inhumanely used as breeding machines. Aside from indirectly supporting the cruel industry, getting a puppy from these shops may cost you more money for veterinary expenses.

A well-bred Bulldog may cost a lot more but they often live longer and are generally healthier. If you are from the United States, it is a good idea to get an AKC-registered Bulldog puppy. Be sure to check if the puppy’s parents have passed health screenings for different genetic issues, including hip dysplasia, cystinuria, progressive retinal atrophy, etc.

Bulldogs make wonderful companion pets although they are one of the most expensive dogs to own. So it is better to get a Bulldog puppy from a breeder who genuinely loves the breed and aims to produce healthier Bulldogs that fall within the breed standard. A good breeder aims to improve the breed by selecting good parents to get rid of genetic flaws.

Bulldog hot spots are painful and itchy areas caused by different factors. Also known as acute moist dermatitis, these hot spots suddenly show up on dog’s skin especially in areas that are prone to moisture, such as the neck, hips, and in between skin folds. Appearing as red and moist lesions, these patches often exude END_OF_DOCUMENT_TOKEN_TO_BE_REPLACED

This post is sponsored by Suchgood, however, all opinions are our own. One of the first times I took my bulldog out in public, a END_OF_DOCUMENT_TOKEN_TO_BE_REPLACED

I think we can all agree that bulldogs are some of the cutest dogs out there, and they’ve got hilarious personalities on top of that. END_OF_DOCUMENT_TOKEN_TO_BE_REPLACED