Some dogs – if not all – love to dig. It’s an instinct they got from their ancestors, which they do in different situations. So why do dogs dig? 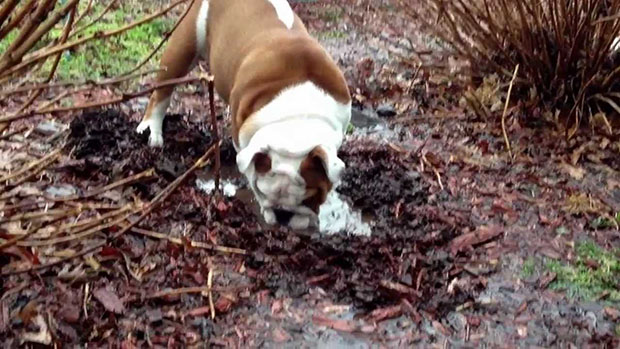 Dogs Dig to Make a Den

Your Bulldog Digs Because He Wants To Make His Spot Comfortable

You might have noticed your Bulldog dig his bedding and circle before resting. Ancient dogs often dig holes in either cool or warm areas – depending on the climate in the area they’re in. Dogs also dig to make their resting areas comfortable; or try to get warm or cool.

Your Bulldog digs because he wants to have fun

Let’s face it: Bulldogs oddly love digging and frolicking in the mud. It’s an activity in which they can have fun and cool down at the same time!

Sometimes dogs dig to bury something important for them like food and toys. This behavior was passed down to them by their ancestors. By digging and burying food, the ancient dogs managed to survive – concealing it under dirt and save it for later.

This behavior has also been seen in modern day dogs, who sometimes bury their food and toys under carpets, piles of laundry, and blankets.

There are some dog breeds – like Dachshunds – that are bred to flush out small animals living underground. These dogs have a strong desire to dog and hunt small prey like badgers, rabbits, moles, and more. If a dog senses an animal underground, he may start digging relentlessly to catch that animal.

I think we can all agree that bulldogs are some of the cutest dogs out there, and they’ve got hilarious personalities on top of that. That is why they need an adorable collar that’s perfect for them. It won’t just up their cuteness factor, though. Collars are also an important part of keeping our pets END_OF_DOCUMENT_TOKEN_TO_BE_REPLACED

Bulldogs are some of the kindest and relaxed dogs you can find. Don’t let their lazy demeanor fool you though, they actually love playtime. That END_OF_DOCUMENT_TOKEN_TO_BE_REPLACED

Have you ever wondered about the different bulldog types and where the originated from? Historically, “bulldog” refers to any dog that was used in the END_OF_DOCUMENT_TOKEN_TO_BE_REPLACED