Some dogs eat their poop. Some don’t. If you happen to own one who does, you are probably wondering why they do it. Why do dogs eat poop anyway? 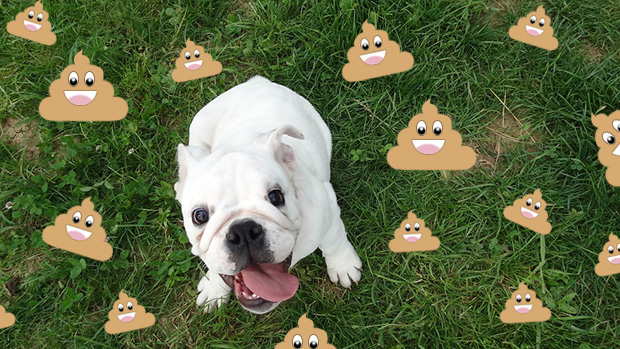 This behavior may probably be nasty for humans, but this is a natural occurrence in dogs. It is a common behavior that even scientists coined a scientific term for it: Coprophagia. This behavior is more commonly seen in young puppies but it often goes away as they grow older.

However, your Bulldog may occasionally engage in this behavior and here are some reasons why.

Yep, dogs do have a thing for funky-smelling things. Your Bulldog may eat his poop because he likes its taste and smell. Some veterinarians also say that sometimes dogs can smell the last food they ate in their feces – especially if their last meal contains ingredients they really like, like chicken liver.

Your Bulldog eats his poop because he eats too fast

When a dog eats too quickly, his digestive system may not fully and properly break down the food. This leaves the food – especially its smell – close to its original state, making your Bulldog attracted to its smell.

Ancient dogs are scavengers. To survive, wolves and ancient dogs had to scavenge for whatever they could find, including animal feces.

Another behavior ancient wolves and dogs also eat their feces to cover up their tracks. This behavior is often seen in mother dogs who are caring for their newborn puppies. Aside from doing it to keep their youngsters clean, mother dogs eat their puppies’ feces to protect them and keep predators away.

Read: Why Does My Bulldog Stare At Me When He Poops?

Your Bulldog is bored so he eats his poop

They say idle minds are the devil’s workshop and it is very true in dogs too. Boredom can cause coprophagia. If your Bulldog does not get adequate exercise, he will use most of his energy to do the most random things like chewing the furniture and eating poop.

Your Bulldog eats his poop, so you won’t find it

Dogs do not really feel embarrassed, but they may eat their poop to hide it from their owners. Puppies who struggled during potty training may eat their own feces in an attempt to hide it. In other words, your Bulldog may assume that having a bowel movement is not desirable and is probably eating poop because he’s scared of being told off.

Your Bulldog eats his poop to keep his spot clean

Dogs do not like lying on dirty spots – especially poopy ones!  If your Bulldog happens to poop in his cage or room, he might take matters into his own paws and clean up – by eating it!

Your Bulldog may eat his poop because he lacks nutrition

When a dog keeps eating his poop, it could be because his food lacks enough nutrition and his body is telling him he needs to eat more – hence, the poop-eating. Dogs who have digestion problems and dogs who eat low-quality dog food are prone to this.

Stopping Your Bulldog from Eating His Poop

If your Bulldog does this nasty habit, do not worry. There are some things you can do to stop your Bulldog from eating poop.

Bulldog hot spots are painful and itchy areas caused by different factors. Also known as acute moist dermatitis, these hot spots suddenly show up on dog’s skin especially in areas that are prone to moisture, such as the neck, hips, and in between skin folds. Appearing as red and moist lesions, these patches often exude END_OF_DOCUMENT_TOKEN_TO_BE_REPLACED

This post is sponsored by Suchgood, however, all opinions are our own. One of the first times I took my bulldog out in public, a END_OF_DOCUMENT_TOKEN_TO_BE_REPLACED

I think we can all agree that bulldogs are some of the cutest dogs out there, and they’ve got hilarious personalities on top of that. END_OF_DOCUMENT_TOKEN_TO_BE_REPLACED